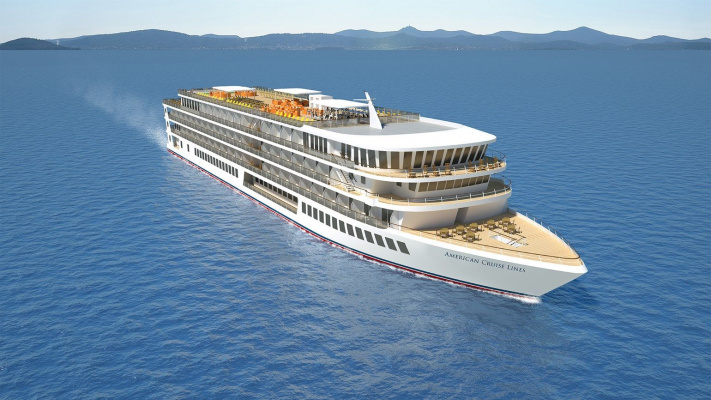 US shipowners continue the fleet development program for inland waterways and the coastal zone. The next new developments are aimed at updating passenger ships for comfortable travel in these difficult waters from a navigational point of view.

American Cruise Lines (ACL), an American tourist operator specializing in organizing cruises on the country's rivers and lakes, as well as coastal sea routes, has announced the launch of a large-scale shipbuilding program Project Blue.

The project provides for the construction of 12 mini-liners of a new generation, the so-called "all-terrain vehicles", capable of safely overcoming areas of shallow depths, as well as approaching almost closely even to unequipped shores and disembarking tourists in the most exotic and inaccessible corners of the country.

American industry analysts note that the planned ACL shipbuilding program is currently one of the largest in the country, and after its implementation, the capabilities of the national fleet of river cruise ships for passenger transportation will be more than doubled.

The new all-terrain liners will have a length of 74.5 (241 ft.) and a width of 17 (56 ft.) meters, designed for comfortable accommodation of 109 passengers, who will be served by 50 crew members. These will be catamaran vessels. Such an arrangement will provide them with the necessary stability when swimming in the coastal sea zone, including in adverse weather conditions.

At the same time, the shallow draft will allow the "all-terrain vehicles" to safely navigate not only along the main fairways, but in close proximity to the shore, overcome extensive estuarine shoals-bars, as well as enter the arms and channels inaccessible to ordinary cruise liners.

Each catamaran liner has 56 cabins, including single and double standard rooms, as well as luxury cabins with individual balconies. For landing on the "wild" shore and practicing water sports in the "green" parking lots, a special "adventurer deck" is provided in the stern of the vessels, on which kayaks, tenders, jet skis, as well as inflatable boats with a rigid frame are placed.

According to the official information of the ACL management, the new vessels are specially designed taking into account the peculiarities of subsequent operation on the lines of the Atlantic Inland Waterway and the Alaska Inland Passage, as well as for the organization of active passenger traffic between the ports of New England.

The construction of Project Blue mini-liners is being carried out at the shipyard of Chesapeake Shipbuilding in Salisbury (Maryland, USA). Work on the construction of the first two vessels of this type – American Eagle and American Glory - has already begun, and the transfer to the customer is scheduled for 2023.

A series of six larger river liners designed for 180 passengers is being built at the same shipyard. Completion work is currently underway on the fifth vessel of the series, American Symphony, which is supposed to be handed over to the operator in the summer of 2022. The sixth liner of the same type is expected to be put into operation next year, 2023.

It is worth noting that the trend towards accelerated fleet renewal for inland waterways, the first signs of which began to appear in the United States in 2021, is becoming systemic and is strengthening.