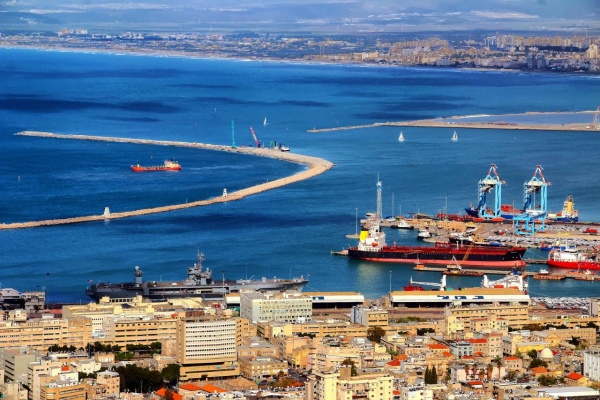 The Antimonopoly Authority will intervene in the conflict between the two seaports in Haifa. In addition, allegations will be verified that the staff of the Haifa port threatened the crew of the vessel, which announced its intention to unload at the new port of Namal ha-Mifrats. This became known on Sunday, January 23.

The official notification sent to the general director of the Haifa port, Mendy Salzman, states the intention to begin an official investigation of suspicions. The Antimonopoly Department demanded an official response from the management of the seaport, which should be transmitted by February 2.
Last week, the Histadrut announced its intention to go on strike in the ports of Israel because of the state's intentions to allow Namal ha-Mifrats to receive and unload general cargo. At the same time, as stated in the department, this port has the right to handle only two types of cargo - containers or new cars.

The state, in turn, claims that the new measure is forced, given the large congestion of ships in the old seaport of Haifa. Cargo handling for this reason stretches for several weeks. The Antimonopoly Authority considers the resulting struggle between the two ports as an attempt to reduce competition and therefore considered it necessary to intervene in the conflict.
According to a letter signed by lawyer Maayan Mor, the Antimonopoly Department has heard rumors that in an attempt to reduce the long wait, a cargo ship carrying iron to Israel plans to unload in the coming days at Namal ha-Mifrats. In response, the head of the Transport Workers' Association in the Histadrut, Avi Edri, warned that if this happens, the union will respond with administrative measures.

According to the information available in the Antimonopoly Department, the ship's crew eventually decided not to unload at the new port. The reasons for this decision are still unclear. "Among other things, there was a suspicion that the employees of the Haifa port addressed the importers and agents of the vessel with a "strict warning" in case the vessel unloaded at Namal ha-Mifrats. "There were suspicions that the crew of the vessel was trying to appease with the help of promotion in the queue, and also threatened that in case of refusal, various sanctions would be applied against the vessel."

The management of the Haifa port reported that "the port is very popular among shipping companies and importers in Israel and in the world. The reasons for this are professional: the port employees provide a high level and quality of services. Only the day before, the port broke the record again, when 1,450 cargo containers were received there in just one day. This fact is the best answer to the nonsense that they are trying to build on us."