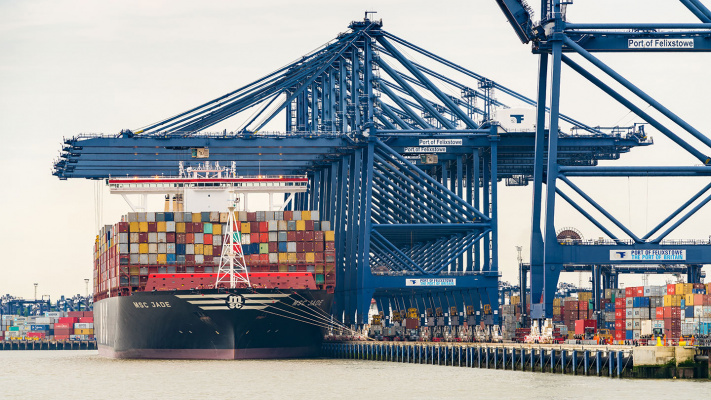 Felixstowe cargo port in Suffolk, the largest container port in the UK, is unable to handle incoming container ships due to a shortage of loaders and truck drivers.

The port of Filixstow, which is operated by Hutchison Ports and which handles 36% of containers entering and leaving the UK, says the problem is due to several factors. This is primarily a pandemic and the associated shortage of loaders in the port, a shortage of truck drivers, as well as the consequences of Brexit, an unstable schedule for the arrival of container ships, etc. repeatedly.

As a result, container ships now spend twice as much time in the port as in the previous year - nine days versus four. The unloading process itself is slow due to the lack of loaders. And after unloading due to a shortage of truck drivers, containers are much slower to move out of the port to customers than before. There are now about 7.5 thousand containers with cargo already removed from ships and about 50 thousand empty containers that suppliers cannot take back in the port.

In order not to stand idle, many container ships leave for other ports in the UK or Europe. There the containers are loaded onto ships of smaller capacity and then they are transported directly to their destination. The world's largest shipping company, Danish AP Moller-Maersk, said Filixstowe has become one of the most troubled ports in the past two weeks. In order not to keep the ships in line for unloading, the company sends one in three of them to Rotterdam, and then from there on smaller ships carry the cargo to the UK. Other carriers, notably Taiwan's Evergreen line and Evergreen Marine, and France's CMA CGM, have already been warned not to leave empty containers at Filixstowe.

Quad Alliance is conducting naval exercises in the Bay of Bengal

Migrant ship sank off the coast of Colombia