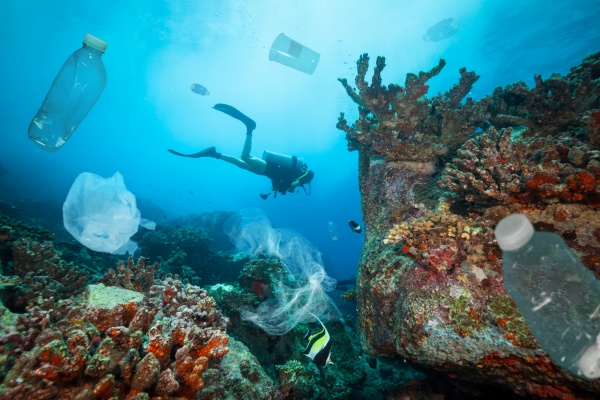 The main sources of microplastic particles in the Earth's atmosphere are the oceans, roads and agricultural land. This conclusion was made by American scientists, whose article was published in the scientific journal Proceedings of the National Academy of Sciences. Every year, about 300 million tons of plastic waste ends up in wastewater and landfills. Most of it does not decompose quickly enough and can remain almost intact for tens and even hundreds of years.

Microparticles of plastic trapped in the ocean do not stay in the water for a long time. Apparently, they are often eaten by marine animals. As a result, this plastic can enter the human body along with seafood.
In a new study, Cornell University professor Natalie Mahovald and her colleagues are interested in how the Earth's atmosphere may play a role in the spread of microplastics. They set up 11 stations in different parts of the US Southwest that filtered air and trapped plastic and dust particles.
Over the past year and a half, scientists have collected more than 300 air samples. Their analysis showed that the three main sources of microplastics are the oceans, roads and agricultural land.
The ratio between them depended on where the air samples were collected. The continent was dominated by microplastics from roads and fields, while off the coast, the oceans and seas were the main source.

The latter, according to scientists, suggests that the World Ocean is the main source of plastic microparticles in the air. In general, it accounts for more than 90% of the total mass of such particles in the Earth's atmosphere. Their main sources are the Mediterranean, the western coast of the United States and the southern shores of Australia.
Researchers hope that similar studies will emerge from other parts of the planet. Thanks to this, it will be possible to clarify the amount and mass of plastic particles in the atmosphere and understand how their spread through the air can affect the work of key ecosystems in the world, which are critically important for the normal life of people, plants and animals.

USA wants to get the north