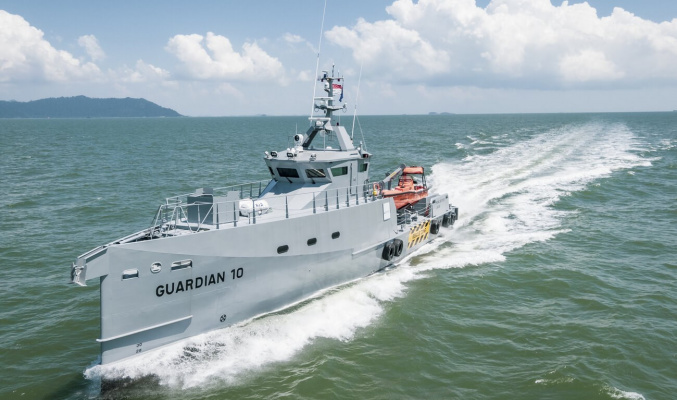 The patrol ship "Admiral Storny" of the OPV (Offshore Patrol Vessel) type, built in France for the Argentine Navy, has arrived in Buenos Aires. As Infodefensa notes, this is the third ship of this class transferred to the Argentine Navy.

In 2018, Argentina signed a contract with the Kership consortium formed by the French companies Naval Group and Piriou. As part of the agreement, Kership is to hand over four Govind-class corvettes to the customer.

The first in the series was the ship "L'Adroix" built for the French fleet in 2011. Before delivery to Argentina, it was overhauled and modernized. The flag on board was raised in December 2019 and renamed "Bouchard".

The second corvette, Piedrabuena, was delivered to the customer in April 2021.

Launched at the Kership shipyard in Lanester in 2019, Admiral Storny was launched in the spring of 2021 and transferred to the Concarneau shipyard for retrofitting.

In the same place in Concarneau, in September of this year, the fourth corvette, "Rear Admiral Cordero", was launched. Its tests are promised to be completed in the first half of 2022.

All four OPV ships are planned to be stationed at the Mar del Plata naval base.

Unlike the first ship of the series, Bouchard, which is armed with a 20-mm artillery complex and two 12.7-mm machine guns, the rest of the corvettes received remote-controlled 30-mm artillery mounts from the Italian Leonardo group. Also on board the ships built specifically for Argentina, it is envisaged to base a heavier helicopter weighing up to 10 tons and two high-speed boats with a rigid hull of the RIB type (9 meters and 7.5 meters long).

The total displacement of the Govind-type corvettes is 1,650 tons, the hull length is 87 meters, the width is 13.6 meters, and the draft is 3.8 meters. Equipped with diesel engines, the ships are capable of speeds up to 21 knots, cruising range - 7,500 nautical miles, autonomy - three weeks. Crew - 42 people.

The hulls of the ships are reinforced for sailing in Antarctic waters.