Home News The sea of Marmara is covered with slime 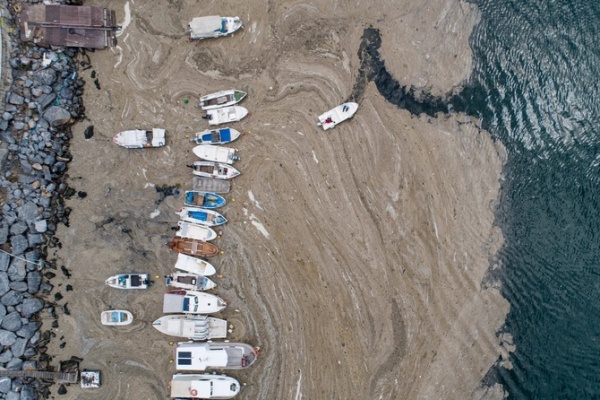 Slime has covered the Sea of Marmara near Istanbul, scientists have already begun to study it, DHA reported.
The gel-like substance, experts say, is also found in the depths of the waters.

"We have not seen this phenomenon on such a scale before," said Baris Salihoglu, director of the Middle East Technical University of Turkey (ODTU).
According to him, the level of oxygen in seawater has seriously decreased, and therefore urgent measures are required.

The University research vessel Bilim-2 has been at sea for three days and will stay there for another four. The results will be forwarded to the Turkish Ministry of Environment. There are 25 people on board, 15 of them are scientists.

According to Salihoglu, untreated effluents from industrial plants and rivers make a significant contribution to the formation of mucus in the sea. The salt level, as noted by the researcher, needs to be reduced by half, then the oxygen in the seawater will be restored in five to six years. Scientists also suggested that the ministry work on improving sewage treatment plants in five districts of Istanbul, where the sea is the most polluted.

In addition, scientists from the Gebze University of Technology began a separate study: they took samples of sea water and silt from a depth of 15 meters. In addition, scientists measured important indicators, including the level of oxygen in the water in the Pendik area of Istanbul and near the island of Buyukada.

"When we establish this, then in the future we will be able to warn of a new threat of mucus in the sea and take action," the director of the institute, Professor Salim Ongel told the agency.
The researchers also plan to talk about possible ways of utilizing the collected mucus and whether it can be used for energy production or in agriculture.