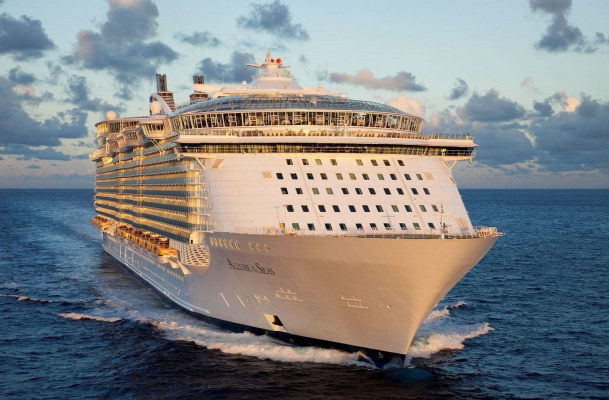 Despite the Covid-19 epidemic, the supergiant of the world passenger fleet Wonder of the Seas was built in just 2.5 years and set off on its maiden voyage on November 5, 2021.
The record-breaking both in size and in passenger capacity, the liner was built at the Chantiers d'Atlantique shipyard according to the order of the American cruise company Royal Caribbean International. The tests and delivery of the vessel to the customer were completed by the end of October 2021, and on November 5 the liner left Saint-Nazaire and went to Marseille to prepare for the first voyage with tourists on board, which is scheduled to begin in the spring of 2022.

Cutting steel for the superliner began at the Chantiers de l'Atlantique shipyard in April 2019, and the first fully assembled section was installed in dry dock in October of that year. However, the overall delivery time for the vessel has been slightly extended as the facility was temporarily closed in 2020 due to restrictions related to the Covid-19 pandemic. The launching of the liner took place in September last year, and its sea trials were carried out in August 2021.

The threat of a worldwide epidemic also forced Royal Caribbean to change preliminary plans for both basing and using the new vessel. Previously, it was assumed that Wonder of the Seas would be permanently based in Shanghai, but later the operator decided to use this port as its main base only for the summer months, and organize cruises with start and end in Hong Kong for the autumn-winter period.

Now, while waiting for China to reopen its ports for foreign cruise ships, the liner will begin its scheduled flights from Miami (Florida) in March 2022, and by the summer of the same year will be relocated to Europe, where the starting points for its new cruises will become the ports of Barcelona (Spain) and Civitavecchia (Italy).

Wonder of the Seas will be the fifth (and so far the largest) in the family of Oasis-class superliners that form the core of Royal Caribbean's cruise fleet. Currently, the construction of the sixth vessel of the same type is underway at the Chantiers de l'Atlantique shipyard, which is supposed to be handed over to the customer by the end of the first half of 2024.

At the same time, the German shipbuilding company Meyer and Finnish shipbuilders began work on the construction of a new type of cruise ship for Royal Caribbean. According to preliminary data, the size of this superliner is unlikely to surpass the Wonder of the Seas, however, in the design and implementation of the project, special attention will be paid to further increasing the level of comfort and more efficient zoning and use of indoor recreational space.