The first tanker with liquid hydrogen went to sea 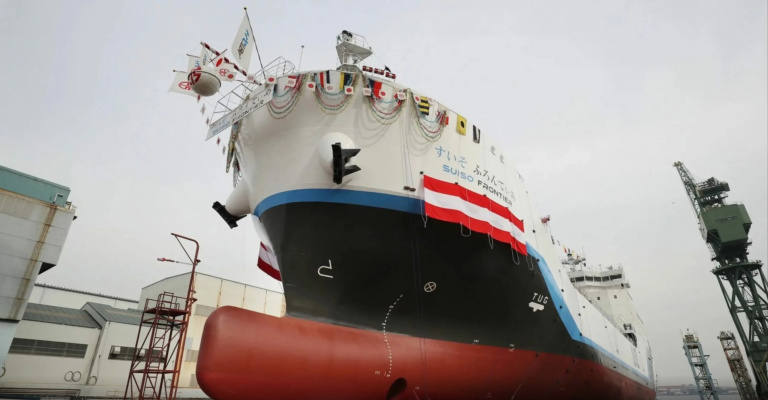 The first large batch of liquefied hydrogen was shipped by sea from Australia to Japan on board a unique tanker Suiso Frontier, specially designed to transport this ultralight gas.

According to the management of the pilot project on the organization of the hydrogen energy supply chain (HESC), during the delivery of the first trial batch of liquid hydrogen, both the ship's systems and mechanisms "responsible" for creating comfortable conditions for super-volatile gas and the readiness of onshore infrastructure facilities to organize efficient loading and unloading operations with minimal loss of valuable cargo will be checked.

The 116-meter (380 ft.) Suiso Frontier tanker was designed by Japanese shipbuilders and built at the shipyard of Kawasaki Heavy Industries. Its main feature is special tanks / tanks for storing liquefied hydrogen, equipped with vacuum insulation. The vessel was launched in 2019 and at the end of last year went on its first voyage to the shores of Australia.

According to HESC, the tanker's loading in the first commercial flight will be 70% of the design (75 tons of liquid hydrogen). Previously, the gas was cooled to a temperature of -253 °C at the onshore liquefaction station of the Australian port of Hastings, after which it was pumped to a tanker, where it will be stored at the same temperature for the entire duration of transportation.

Loaded with liquefied hydrogen, the vessel left Hastings on the evening of January 28, and in mid-February it is expected to arrive at the Japanese port of Kobe, where its cargo will be pumped to the onshore storage at the same low temperature. Thus, the entire logistics chain of sea transportation of "green" gas, one of the key links of which is the tanker Suiso Frontier, will be practically tested.

It should be noted that the very project of providing consumers with "clean" hydrogen energy is inherently contradictory, since this gas, which is absolutely environmentally friendly in itself, is still produced from brown Australian coal (lignite) and biomass, that is, using pure carbon fuel and the corresponding emission of harmful substances and compounds into the atmosphere.

Nevertheless, HESC developers intend to bring the project to a commercially justifiable level by increasing the volume of production and transportation of liquefied hydrogen to 225 thousand tons. per year by the mid-2020s. It is noteworthy that Japan will become the predominant consumer (and possibly re-exporter) of environmentally friendly hydrogen fuel, while production that is quite harmful from an ecological point of view will go to Australia.

In any case, the success of the first flight of Suiso Frontier largely depends on the further improvement of technologies that ensure long-term safe storage of hydrogen in a liquefied state, as well as the prevention of its uncontrolled evaporation and significant losses.

The successful solution of such problems will serve as an additional incentive for the use of liquid hydrogen as fuel – including on sea vessels: from a tugboat and a self-propelled floating crane to a passenger ferry.

Maersk Viking mobilizes for work on the Malaysian shelf