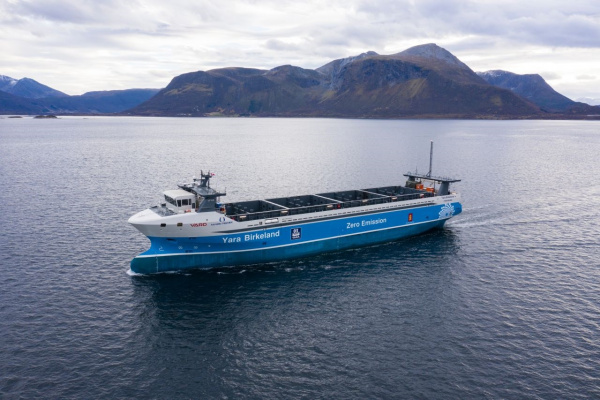 It has been known that one of the famous Norwegian companies, Yara International, has created the world's first vessel Yara Birkeland with a zero-emission level, capable of autonomously transporting containers. It is planned that this vessel will make its first flight without team members on board at the end of 2021.

Yara International began work on the project of an electrical container in 2017. The ship is named after the Norwegian scientist Christian Birkeland (1867-1917), which developed the method of industrial synthesis of nitric acid from the air.

Yara Birkeland's first autonomous sailing will be performed between two Norwegian cities - Guerle and a brave. Although there is no team on board this cargo vessel, it will still be under thorough observation of the three coastal management centers at once. Initially, the loading and unloading of the ship is still carried out by people, but in perspective, as John Slatten noted, director of the Yara plant in the Norwegian PortsGrune, most of the operations will be carried out with the help of autonomous technologies. Autonomous cranes, as well as portal container carriers can move containers both on the ship and from it. Such autonomy will reduce operating costs during the transportation of goods, and fully electric cargo ships will deliver the environment from carbon emissions.