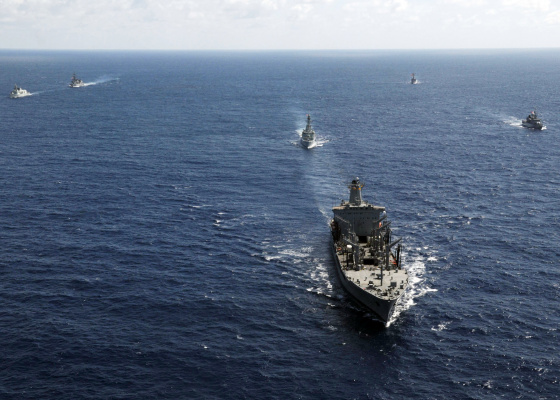 In the western part of the Pacific Ocean, the Malabar multilateral maneuvers started, which will last from 26 to 29 August. The Indian and US navies, as well as the Japanese Maritime Self-Defense Forces and the Royal Australian Navy are taking part in them. This was reported on August 26 to the Indian Ministry of Defense.

The Indian Navy includes the Shivalik frigate and the Kadmatt corvette, as well as the P-8I naval reconnaissance aircraft and carrier-based helicopters; intelligence.

"The Japanese Maritime Self-Defense Forces will be represented by the Kaga helicopter carrier, the Shiranui destroyer, the Marasame destroyer, as well as a submarine and a patrol aircraft. The Royal Australian Navy will present the Warramunga frigate," the Indian Defense Ministry said.

The Ministry of Defense recalled that the Malabar maneuvers had been conducted since 1992 with the participation of India and the United States. In 2015, Japan joined them on a permanent basis. Australia became a regular participant in the exercise last year.

Norwegian cruise ship will sail to the White Sea in 2022