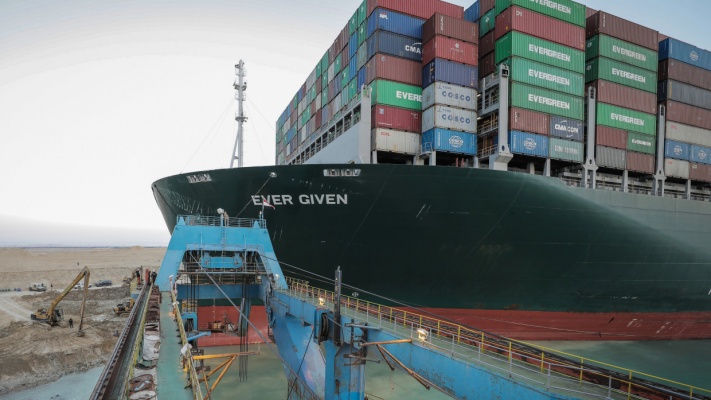 All information from the beginning of the crisis to the very end was requested from the container ship.
The Commission of Inquiry into the Suez Canal incident, where the container ship Ever Given, stuck across the channel, blocked shipping for almost a week, retrieved a black box from the ship to study the records of all the crew's conversations, the captain's orders and the signals that the ship followed before as run aground, as well as during the incident. TASS reports.

According to the canal administration's advisor, head of the commission of inquiry, Seyid Sheisha, all information was requested from the container ship from the beginning of the crisis to the very end. "We have also requested records of past ship accidents and a report on its technical condition," he said. "All responsibility for the incident lies with the ship and its captain, and not with the Suez Canal authorities."

As Sheisha pointed out, "if the ship refuses to cooperate with the investigation, the case will be re-qualified as an administrative offense, and the ship, along with all the cargo, will be detained until the verdict of the court." In this case, he warned, the process could drag on for two years. If the crew interacts with the commission of inquiry, "the issue will be resolved within 3-4 days," he promised.
An official investigation into all the circumstances of the container ship incident began on Wednesday. The investigation will, in particular, find out whether the captain of the ship followed the instructions of the canal management before running aground. “We need to thoroughly find out what equipment was on the container ship and whether it was properly deployed,” Sheisha said.

France takes command of the coalition fleet in the Persian Gulf