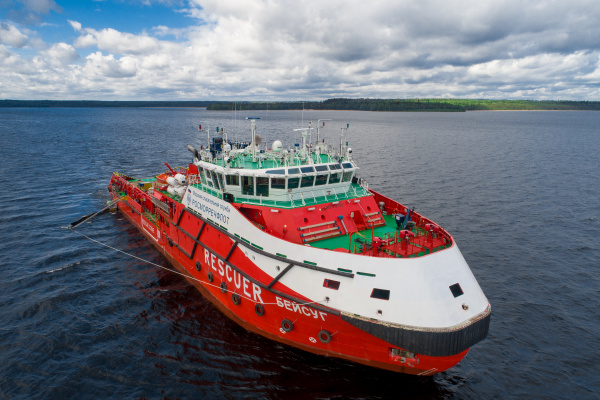 Taiwanese corporation CSBC held a steel cutting ceremony for a new rescue vessel. According to the island's Central News Agency, it will receive an electric propulsion system and a dynamic stabilization system that will allow it to sail in strong winds.

The Taiwanese Navy has two rescue vessels, the Dahu and Datun. These are former American ships built in the 1940s. After being decommissioned from the US Navy, Dahu arrived on the island in 1977, and Datun joined in 1998.

In 2016, the Taiwanese Navy decided to build 12 new ships, including six rescue ships. The contract for the development and construction of the latter was received by CSBC Corporation, which is also building the first submarine and the first national amphibious assault ship. It is due to hand over a new vessel, so far known as the Anhai, to the Taiwanese fleet by the end of 2023.

A steel cutting ceremony for the Taiwanese rescue vessel took place on 4 August. It will be 87 meters long and 1.5 meters wide. Its full displacement will be almost 3.3 tons. The ship will be able to move at a speed of 18 knots when fully loaded. For comparison, the total displacement of the "Dakhu" with a length of 65 meters and a width of 12.42 meters is less than two tons, and the maximum speed is 12 knots.

Anhai will receive an electric propulsion system and a dynamic stabilization system, which will allow it to go on missions in winds of four on the Beaufort scale, and an underwater robot. The latter will be able to dive to a depth of 500 meters. The vessel will also be equipped with a helicopter deck. It is assumed that it will be able to tow ships with a displacement of more than 30 thousand tons and participate in operations to extinguish fires at sea.

The Taiwanese are trying on their own to renew not only the sea, but also the air fleet. Earlier, we wrote about their first T-5 Blue Magpie jet trainer, which should enter service no later than 2026.