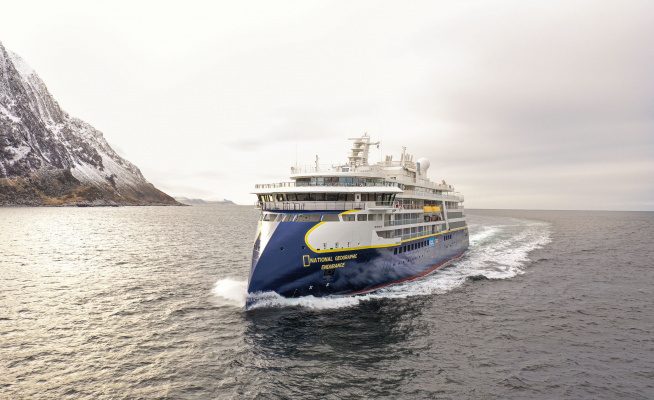 Named after the ship of the famous 18th century exploration captain James Cook, the National Geographic Resolution ice-class passenger liner got its name right in the ice of the Antarctic Sea.

The vessel was built by order of the company Lindblad Expeditions, which specializes in organizing sea voyages in the "extreme" regions of the polar seas. The project was developed by the Norwegian company Ulstein Design, and the construction was carried out at the Polish shipyard Crist in the city of Gdynia.

Cutting of the steel for the liner began in May 2019, and the keel was laid in September of the same year. In October 2020, the finished hull was towed to the Ulstein shipyard in Norway, where the installation of equipment, finishing and outfitting of the vessel was completed. In September 2021, it was handed over to the customer, becoming the second (after the similar National Geographic Endurance) cruise ship Lindblad Expeditions of the polar class of the fifth level - PC5.

With a length of 12.4 m and a width of 21 meters, National Geographic Resolution has a deadweight of about 1250 tons and is capable of a stroke of 16 knots. It takes on board 126 passengers, with 112 crew members providing a pleasant journey. In addition, there are reserved seats for another 22 guests.

The vessel has a distinctive silhouette thanks to the special bow shape, made using the special X-BOW®solution technology. This ensures more reliable protection against flooding and splashing, as well as good germination on waves and a stable soft ride in any weather.

The "Ice Baptism" ceremony was held on November 22, 2021 in Das Bay (Weddell Sea), at the very beginning of the first cruise, during which National Geographic Resolution will visit Antarctica, South Georgia Island and the Falkland Islands.

After completing its Antarctic voyage, the liner will operate in Europe in the spring and summer of 2022, cruising between ports in Portugal, France, Scotland and Norway, and in the fall will return to Antarctica, having visited Japan, the East China Sea and the remote islands of the Pacific Ocean on the way. ...

As Korabel.ru noted, the gradual easing of restrictions associated with the Covid-19 pandemic is helping to restore the cruise market and, as a result, increase demand for a modern passenger fleet, as old liners are massively scrapped.

Meanwhile, shipbuilders are handing over to the customers ships, contracts for the construction of which were signed in the pre-crisis period. So, on November 5, the world's largest cruise ship Wonder of the Seas set off for its maiden voyage, and on November 10, the ice-class liner Greg Mortimer was launched.

Danish military sank a pirate ship off the coast of Nigeria