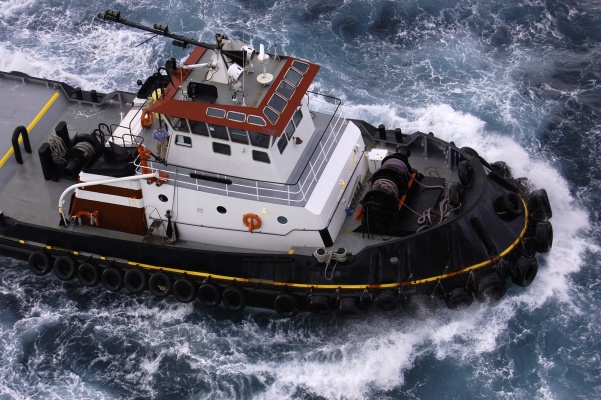 Rescue tugboat "Lazurit" Maritime branch of the Maritime Rescue Service awaits improvement of weather and will continue towing fishing vessel "Vitim" to a safe berthing.
According to the rescuers, the fire started on the night of 6 March in the fishing workshop of the fishing vessel "Vitim", belonging to LLC "Pacific Crab" (Vladivostok Home Port), when it was 12 miles away on the Askold Island traverse. The ship’s salvage party immediately began reconnaissance of the fire and possible localization of the fire. Because of the haze, it was not possible to do so.

The crew took all measures to contain the emergency and acted on the alert schedule. By the decision of the captain, "in order to preserve the safety and lives of the people, it was decided to abandon the ship". 30 sailors were evacuated and sent to Vladivostok.
The shipowner requested the assistance of the Maritime Rescue Service. The main fireplace was located and the remains of the fire were removed by 5:00 pm on 8 March. After the reconnaissance by the Morosas Service, the rescue tug "Lazurit" put the cables on the emergency boat and started towing.

At present, the rescue vessels and rescue services of the Morospovs are continuing the work necessary to put RS "Vitim" into the wharf. As of 8:00 on 9 March, the ice trench from the starboard side, the movement of remnants of equipment and the removal of debris from the ship’s heels after the fire reduced it to 25 degrees. The ship has been sealed. Information about a new fire that appeared in some media is untrue.
The shipowner, together with the control and rescue services and agencies, shall take the necessary steps to establish the reasons for the incident. At the moment, due to the worsening weather, the rescue tug "Lazurit" and the fishing boat "Vitim" are drifting in anticipation of the improvement of the weather.