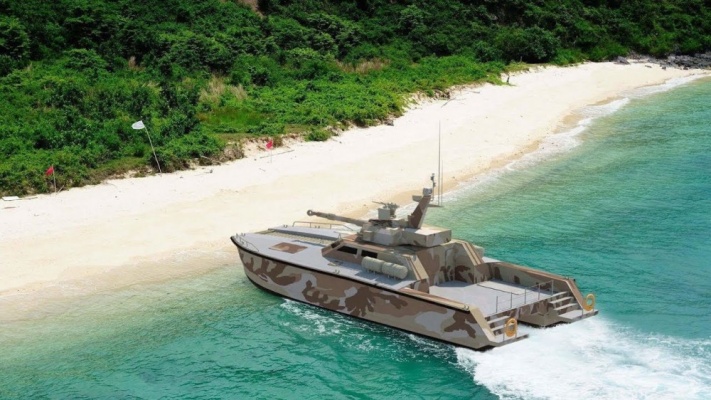 The new warship of the Indonesian Navy - Antasena combines the qualities of a speedboat and a tank, thanks to the characteristic turret with a cannon. Such a "hybrid" is the best fit for a country consisting of 17,508 islands with 61,567 miles of coastline, which is almost 5 times more than the United States.
Indonesia's Ministry of Defense acquired Antasena from local defense contractor PT. Lundin. If the "amphibious tank" in the process of testing shows itself well, then the country's armed forces will acquire another one. The boat is very economical: one tank of liquefied gas is enough for it to patrol nearly 1,000 kilometers of coastal waters.

The Indonesian armed forces have two main tasks: the first is to defend against an external attack, which will require a rapid transfer of troops from one island to another, and the second is to combat internal piracy.
Antasena is designed for sailing in the so-called "brown waters" of coastal areas. It is a catamaran, which gives the vessel good stability and a small - only 91 cm - draft, and this allows the landing of the Marine Corps from it. In total, it can accommodate up to 20, and according to some sources, up to 60 marines.

The dimensions of the catamaran are 17.9 x 6.4 m. It is equipped with two MAN engines with a capacity of 1200 hp. from. and two water cannons. At high speed, the hull resistance is reduced, which allows the ship to accelerate to almost 75 km / h. The maximum cruising range is about 1000 km.
The tower is equipped with a 105-mm Belgian Cockerill cannon, which fires high-explosive and anti-tank shells, including at an angle of 42 degrees, which turns it into a mortar or howitzer capable of destroying targets out of line of sight. The cannon can also fire Falarick anti-tank missiles at a range of up to 5 km.