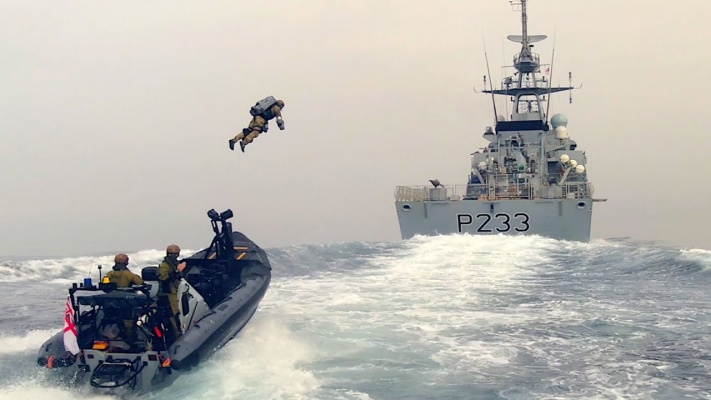 British jet suit company Gravity Industries has conducted tests with the Royal Marines of Great Britain.
This was reported by the company itself.

So, a pilot on a jetpack took off from the boat and landed on a mobile coast guard ship.
Gravity Industries explains that now the Marines can get on the ship, for example, using a helicopter. But the suit allows them to do it faster, land in any part of the ship, and then leave it on their own.

Gravity Industries was founded in 2017 by British Richard Browning. He previously worked in the oil industry and was in the reserve of the Royal Marines. Browning himself created the prototype of the Gravity Industries jet suit, working on it for six months.
In 2020, the same company, together with the British Rescue Service, successfully tested the first jetpacks designed for work in difficult terrain.

The suit consists of four jet engines, which are attached to the pilot's arms, and another engine on the back. It costs more than 400 thousand dollars, so for now the company makes money mainly by renting out its suits.

What is a jetpack?
This is a personal aircraft that is attached to the back and allows a person to be lifted into the air using jet thrust. The thrust is created by the jet stream thrown by the engine vertically downward.
There are two main types of jetpacks: rocket and turbojet.