Home News In Egypt, Ever Given ship was arrested before the payment of $ 900 million 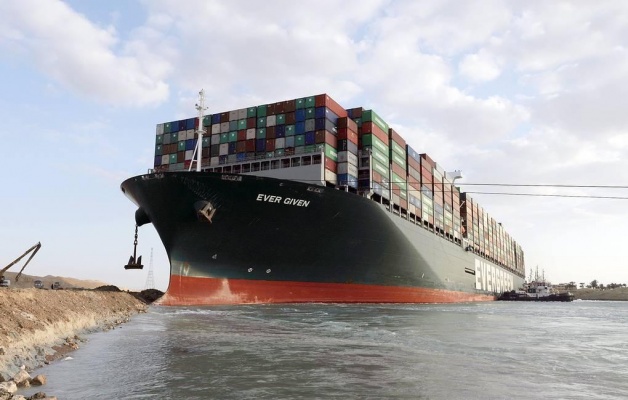 The arrest of the container ship Ever Given, due to which traffic on the Suez Canal was stopped in March, was imposed by the court. The vessel, which was removed from the shallows on March 29, remains under the control of the Egyptian authorities.
A court in the Egyptian city of Ismailia granted a motion by the Suez Canal administration to arrest the container ship Ever Given, which blocked traffic on the waterway for several days in March. The head of the administration of the channel, Osama Rabia, told the Youm7 portal.

According to him, the arrest of the vessel, which remains in the water area of Bolshoy Gorky Lake after being floated, became an interim measure in the claim of the administration seeking compensation for losses associated with the termination of movement along the canal and the cost of removing Ever Given from the aground. Rabia estimated the total amount of claims at $ 900 million.
In early April, the official estimated the total losses from blocking the channel at $ 1 billion and said that the administration headed by him intends to seek compensation.

Earlier, Admiral Mohab Mamish, adviser to the President of Egypt for the development of seaports and the Suez Canal, said that the owner of Ever Given did not intend to bring the case to court and would like to pay compensation under the settlement agreement.
Rabia assured that the arrest of the vessel does not mean the end of negotiations with its owners and that if an agreement is reached, Ever Given will be able to continue on its way.

Oil inventories in the US fell more than ever