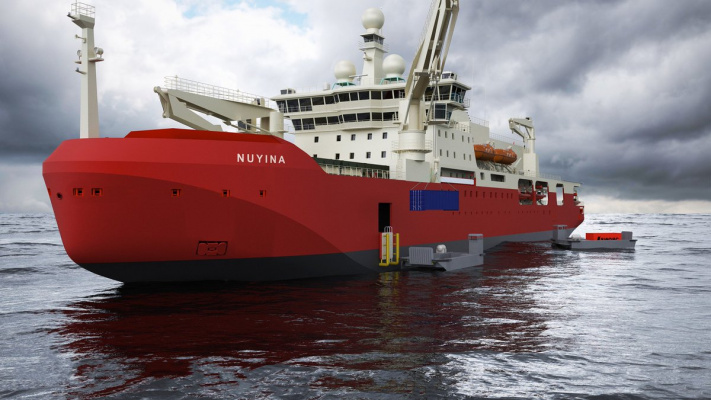 An icebreaker, built for Australia in 2020, is undergoing repairs at its home port.

The newest icebreaker Nuyina, built in the spring of 2020 for Australia's national Antarctic exploration program, was repaired immediately after arriving in Australia. This was announced on Tuesday by the press service of the country's polar division.
According to her, the crew of the research vessel, which completed sea trials in the Netherlands six weeks ago, reported "a malfunction in the electrical system of the left side engine" on the way to the port of Hobart. "After assessing the problem, it was decided to use the starboard propulsion system to enter the port without the help of a tug," the press service noted.

Also in the polar division it was reported that the engine breakdown will be eliminated by the manufacturer and "will not affect the future operation of the vessel." “ Nuyina is designed to operate in the harsh conditions of Antarctica and all of its critical systems have a very high safety margin," it said. It notes that the vessel will undergo a series of tests in Australian waters before embarking on the first expedition to the South Pole, scheduled for December this year.
The icebreaker Nuyina, which was completed in September 2020 in Galati, Romania, is one of the most modern research vessels in the world. From October 2020 to August 2021, the ship was tested in the North Sea, and on September 1 went to the home port of Hobart. Nuyina is slated to become Australia's flagship research vessel over the next 20 years and, in addition to scientific expeditions, will also be used to supply polar stations in Antarctica and Macquarie Island.

It will employ 116 researchers, 32 crew members and a ship's doctor. A specially equipped laboratory with an area of more than 500 square meters has been built for scientists. m. In case of emergency, the vessel is equipped with a store for supplies capable of ensuring the survival of the crew for six months. It is capable of taking on board 1.2 thousand tons of cargo and 1.9 million liters of fuel.