Home News Germany is determined to research in the Arctic 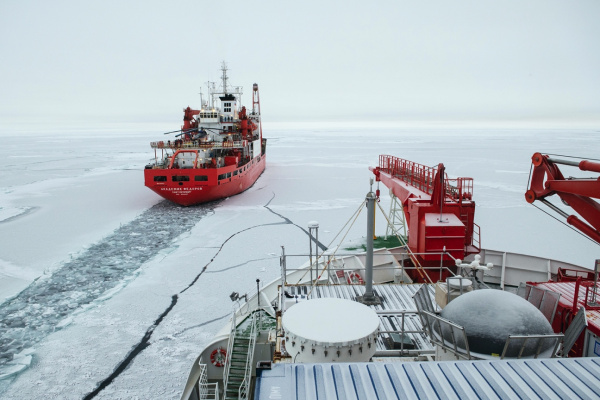 The annual budget for polar research at the Alfred Wegener Institute for Polar and Marine Scientific Research is about 100 million euros. The highly developed material and technical base of this institution includes the research vessel Polarstern and two Arctic stations. On Svalbard - a joint venture with the French, and on Samoilovsky Island - with the Russians.

Germany is forced to pursue a very cautious policy in all directions. Above, we have already cited data on the quantitative composition of the American military contingent in the country. In fact, the occupation continues, and the German special services are still under the CIA's cap.
But the Germans have learned to be cunning. They don't act rashly. When the German Foreign Ministry insists on the need to protect the Arctic ecosystem and the habitat of indigenous peoples, it primarily has in mind the prospect of Germany's access to mineral resources. Not only to hydrocarbon, but also to non-ferrous and rare-earth metals. It is not in vain that speeches are constantly heard in the Bundestag about strengthening the country's energy and raw material security.

It should also be borne in mind that Germany is one of the largest exporters and importers of goods in the world. Of these, 90% are delivered by sea. By looking closely at the Arctic shipping infrastructure, which significantly reduces the transport costs of German companies, Germany is looking to the future. The Damocles' sword of sanctions will not last forever. Moreover, as the Nord Stream 2 project has shown, Germany is able to interact with Russia under the economic embargo of a partner country. Well, in Russia there will always be a demand for German technology, machinery and equipment.

Germany is not only an observer of the Arctic Council (since 1998), but also a participant in the so-called Svalbard Treaty of February 9, 1920. So, despite close military cooperation with Norway (Germany builds and sells its diesel-electric submarines to Norwegians), Germany's position on economic activities on the shelf of the archipelago will not differ much from that of Russia.

The main aspect that will help the Germans to influence the decisions of the Arctic Council is not even the economic power of this country, but its rapprochement with Russia in many mutually beneficial programs. This can be beneficial to the entire European Union. And then global competition comes into play, in which there are no blocs and alliances. When the Federal Government emphasizes its commitment to the 1982 UN Convention on the Law of the Sea, for some reason, the attitude towards this document in the United States is recalled. With regard to the Arctic, the Americans do not recognize the Convention. The Germans, however, admit it unconditionally.

However, the Germans do not have a clear program of action in the Arctic.

The world's most modern cable-laying vessel