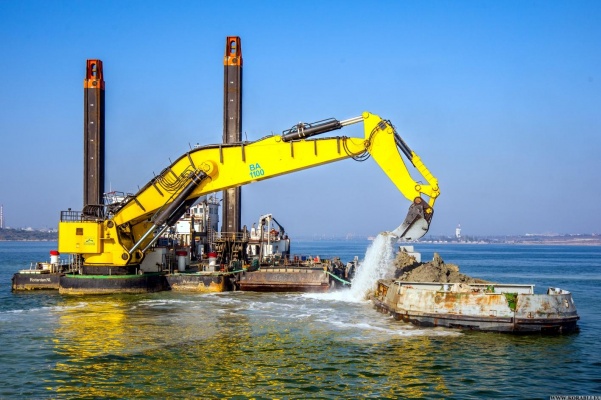 The Suez Canal Authority (SCA), in the course of resolving the recent emergency that led to the cessation of free navigation on the canal, made every possible effort and coped with the task professionally using its own resources to solve it. This was stated by Admiral Osama Rabi, Chairman and Managing Director of the Suez Canal Administration. He answered some questions related to the rescue operation of the stranded Panamanian container ship Ever Given and the impact of the incident on international shipping and global trade, the SCA said in a press release.
An SCA spokesman said that two dredgers, Mashhour and Tenth of Ramadan, from the administration's dredger fleet were involved in the work. The rescue operation involved 15 SCA tugs and nearly 600 workers from various departments.

According to Osama Rabi, in resolving the crisis situation, for the first time in the practice of removing a vessel from aground, dredging works were used. This is a rather unconventional solution, given that the use of dredgers requires high precision dredging operations and adherence to strict safety standards.
The head of administration stressed that any doubts about security in the Suez Canal are unfounded, as the SCA has been taking proactive measures in this regard since 2015. “It was then that President Abdel Fattah el-Sisi announced the launch of a new project for the Suez Canal, which aims to increase the canal's capacity to accommodate vessels with very large draft, especially large container ships. This project also had a significant impact on achieving the highest level of safety at sea by doubling the area along the waterway, which made it possible to better cope with possible emergencies on the canal, ”the administration said.

SCA is currently establishing several capacious holding areas on the new expanded Suez Canal in addition to dredging and maintaining design depths on the old canal to enhance the waterway's ability to handle any possible emergency.
Osama Rabi added that “these measures also include the development of 16 waterway tracking stations and the provision of emergency services on the water, as well as various rescue services. That is, in addition to the development of VTS centers in urban points along the route and modernization of the auxiliary fleet of our rescue units, including dredgers, tugs and high-speed boats. "
SCA plans to acquire several new powerful tugs with high bollard pull.
The leadership of the Suez Canal administration has assured the international industry community that traffic along the Suez Canal has returned to normal. The administration recalled that the emergency was resolved in accordance with crisis management requirements and in record time, although there were options to recover the stuck ship that could take too long or result in damage to the ship's hull and cargo on board, the SCA said in a statement.

The Suez Canal Administration, established on July 26, 1956, is a public and independent legal entity. The administration is accountable to the Prime Minister of Egypt and has all the powers necessary to manage the channel, and is not limited in its activities by the laws and regulations of the government. SCA is concerned with channel operations, operations and development. The prerogative of the administration includes the adoption and observance of the rules for the transit of ships through the canal, other rules and regulations ensuring the smooth functioning of the Suez Canal.
The Suez Canal separates the African continent from Asia and provides the shortest sea route between Europe and the territories around the Indian Ocean and the western Pacific Ocean.
Thus, the unexpected situation in the Suez Canal gave impetus for new ideas and developments that will soon be carried out