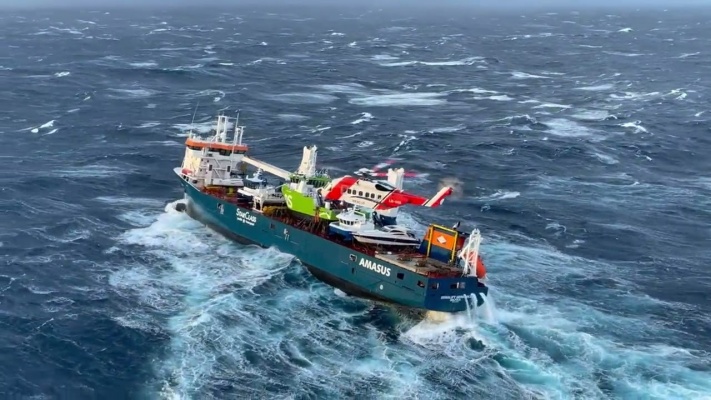 The Dutch ship Eemslift Hendrika is in distress off the coast of Norway, at risk of capsizing. According to local media outlets, there are about 350 tons of heavy oil and 50 tons of diesel fuel on board. In addition, the ship also had 12 crew members who were evacuated.
Norway's Joint Rescue Coordination Center reports that a ship 60 nautical miles west of Ålesund sent a distress signal. Three helicopters and two ships were sent to the scene. The footage shows that the Eemslift Hendrika really tilted noticeably, and waves are raging around that strive to overturn the ship.

It is noted that at first it was decided to evacuate eight people from the ship, and leave four crew members, but then they were also evacuated from the ship, which heels by as much as 30 degrees. According to Captain, one person was injured and hospitalized.
The Dutch registered vessel MV Eemslift Hendrika was built in 2015 and is operated by Amasus Shipping BV. According to AIS, on March 4, the ship departed from Bremerhaven, Germany, to Kolweid, Norway.
Norwegian authorities fear that if the ship sinks, diesel and fuel spills will occur. The vessel was built in 2015 and is registered in the Netherlands. What it carries is still unknown.