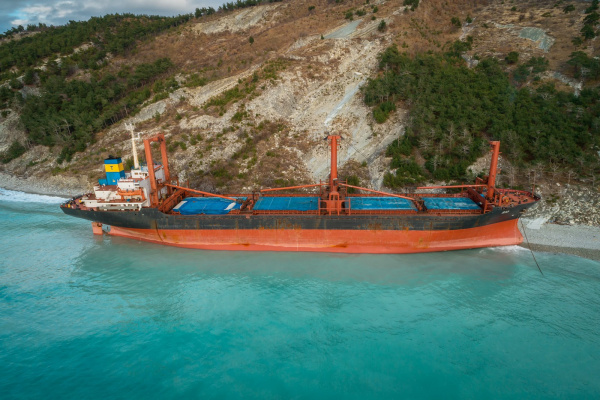 The dry cargo ship VERA SU with several thousand tons of nitrogen fertilizers en route from Ukraine to the Bulgarian port of Varna, which ran aground the day before in the Stone Coast region on the northern coast of Bulgaria, does not pose a direct threat to the environment.
This is the conclusion reached by rescuers who analyzed photographs of the hull of a Panama-flagged ship taken on Thursday by an underwater drone.
As reported by the Bulgarian National Television, experts did not record any damage to the holds, where there are 3 thousand tons of nitrogen fertilizers, and tanks with 20 tons of fuel.

It is planned that on Wednesday divers will additionally inspect the ship's hull and seabed in order to resolve the issue of safe unloading using a floating crane and its further towing to the nearest port. The representative of the Turkish company, which owns the ship built in 1989, approved the plan for the rescue operation.

According to the head of the local rescue service, the crew of the dry cargo ship for more than two hours did not answer calls from the ship traffic control service and did not change course to shore. None of the nine crew members, citizens of Turkey, were injured in the collision, they are still on board. The operational situation is monitored by a border police boat and police officers on the shore.