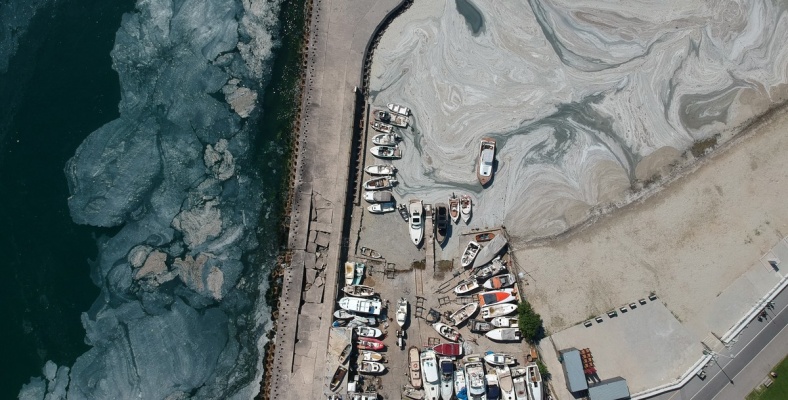 Dangerous slime, threatening the ecosystem, is carried out by the current from the Sea of Marmara to the Aegean, now the slick stretches for about 150 km. This was noticed for the first time in all the years of observation.

Earlier, Turkish media reported that sea slime, a substance that appeared due to the vital activity of phytoplankton, had spread in the Sea of Marmara. The thick mucus layer contains many microorganisms.

“Now the current is carrying these 'sea snot', as they have already been called, through the Dardanelles into the Aegean Sea. Scientists have observed the Sea of Marmara as part of another study, have now been able to pick up satellite images since 2010 and we understand that this is the first time this is happening. 150 km, approximately, in the direction of Thassos.

The head of the department of remote sensing methods explained that it is not yet completely clear to science where the sea slime comes from and how you can counteract its spread. However, it has already been proven that it causes serious harm to the ecosystem of the sea.

“This is a kind of phytoplankton waste product - it releases some substances that become colloidal, bacteria, viruses, etc. accumulate on them. The first materials on its effect on the environment have already been published by colleagues: because of the air bubbles contained in it, mucus keeps on the surface of the water and obscures the underlying layers - as a result, all other phytoplankton begins to die, and this disrupts the entire food chain of the ecosystem. Slime covers the feathers of waterfowl, like an oil film, clogs the gills of fish. If the substance sinks to the bottom, it "suffocates "benthos organisms," the researchers noted.

Experts said that they have been observing the formation of layers of sea slime for several years. However, the specificity of satellite monitoring is such that it is not always possible to accurately identify the data obtained without visiting the site. So it happened in this case: for several years, Sevastopol experts believed that these were colonies of ordinary cyanobacteria - blue-green algae.

"When I was engaged in the Sea of Marmara, from time to time I found some yellow stripes on satellite images - this color when remotely monitored is quite a bit different from that given when cyanobacteria bloom. Now, of course, we have already analyzed the spectra of upward radiation and understand what the nuances are. the pictures are distinguished by “mucus.” Judging by the scientific bases, the issue of “sea slime” was not actively considered until an extreme situation happened this year, ”the scientist noted.

According to her, according to the monitoring of recent years, the situation this year is the most difficult: tens of square kilometers are covered. Until 2015, almost no mucus was recorded. Then it became more, but usually the layer was formed in the spring in the depths of the sea, and only a small part of it came to the surface, as a result, the process itself came to naught in two or three months. With strong winds and rough seas, a smaller proportion of mucus rose to the surface than in quieter times.

An important observation result, she noted, was the relationship between the new phenomenon and temperature trends. Satellite monitoring allows us to obtain highly accurate data on the heating of water, and it showed that now the water next to the accumulation of mucus heats up about 4 degrees more than in the rest of the sea, and with a particularly high concentration - by almost 5 degrees. It hurts all other inhabitants. At the same time, since the 1980s, the average temperature of the Sea of Marmara has increased by almost 2 degrees.
The reason for the appearance of mucus and the increase in its amount, experts say, is not completely clear. They hypothesize that this may be provoked by an excess of hydrocarbons: after all, mud volcanoes beat in the northwest of the Sea of Marmara, and emissions are sometimes comparable in size to industrial oil spills.

“We overlooked, of course, what was said about similar phenomena in the world. changes (the last two winters were abnormally warm) and an increasing anthropogenic load associated with an increase in wastewater inflow.In any case, I think this is a new environmental challenge.Perhaps we will have to look for a way to protect nature from this phenomenon, perhaps - the processes will cope self-regulation of ecosystems ", - the researcher believes.