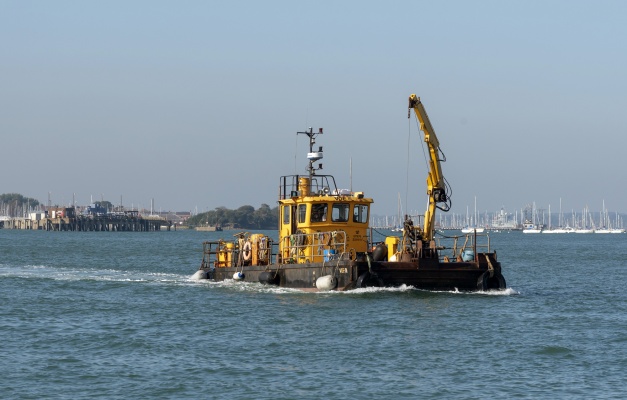 The international shipbuilding companу Damen Shipyards Group has carried out the fast delivery of a multipurpose vessel of the Multi Cat 2712 series. The customer of the vessel is Leak Marine (Orkney Islands, Scotland). The ship, dubbed C-Force, was delivered just six weeks after the contract was awarded, thanks to DAMEN's practice of building up serial standardized models ahead of time and then retrofitting them, the shipbuilder said in a statement.

The vessel of this project is capable of performing a variety of tasks, for example, during hydraulic works, support of diving operations and work on laying underwater cables, handling anchors, etc.
The contract was signed on March 3, 2021. At the request of Leak Marine, the ship had to be delivered as soon as possible. The basic model of this series was in the warehouse of one of the Dutch shipyards. After additional equipment of the vessel in accordance with the specific needs of the customer, it was prepared and already on April 19 the vessel set off under its own power to the destination.

Additional requests included the provision of additional space for desks and computers in the wheelhouse, where Leask Marine customers could work during operations; equipping the vessel with four winches for servicing the four-anchor mooring system of the offshore facility.
The vessel left DAMEN shipyard on April 24, 2021 and headed for Kirkwall. On the way, it entered the Scottish city of Dundee, where its capabilities were first tested: C-Force towed the most powerful (2 MW) tidal turbine Orbital O2 to the Orkney Islands. Upon arrival at the home port, the owner of the vessel will equip it with the equipment necessary for diving operations.

The company DAMEN was founded in 1927. Currently, the international shipbuilding group Damen Shipyards Group (headquartered in Gorinchem) unites 36 shipbuilding and ship repair yards around the world. The total number of employees is 13 thousand people (3.5 thousand - in the Netherlands). To date, the group's shipyards have built more than 6.5 thousand vessels and annually put into operation about 175 new vessels in more than 100 countries of the world. DAMEN specializes in the construction of tugs, boats, patrol vessels, high-speed vessels, cargo vessels, dredgers, offshore platforms, OSR vessels, frigates and mega-yachts. The volume of products manufactured in 2019 in monetary terms reached 2.4 billion euros.
In addition to ship design and construction, DAMEN Shiprepair & Conversion offers customers the facilities of 16 shipyards located around the world for repair and conversion projects with dry docks measuring 420 x 80 m. modern requirements and regulations, as well as a complete redesign of large offshore production facilities. DS&C handles 1,500 repair and maintenance orders annually.