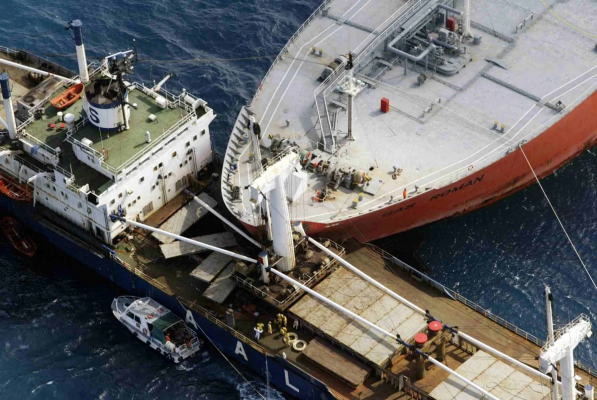 Several days ago, on Sunday morning, the Zephyr Lumos container ship collided with the Galapagos bulk carrier at the port of Muar in the Strait of Malacca, Shipping Magazine reports.

According to Admiral Nurul Khizam Zakariya, who is the head of the Johor region, Malaysia's distress service received a distress signal from the Zephyr Lumos crew that reported the collision.

Moreover, the Zephyr Lumos slammed into the Galapagos on the right in the middle of the ship, severely piercing the hull.
In a statement, Admiral noted that the initial investigation suggests a possible failure of the steering system at the bulk carrier Galapagos. The sailors were not injured, but the agency reported the spill, so the pictures taken after dawn show how the water glistens.

The case is being investigated by the Malaysian Maritime Department and the Environment Department, and both ships were detained pending a decision.