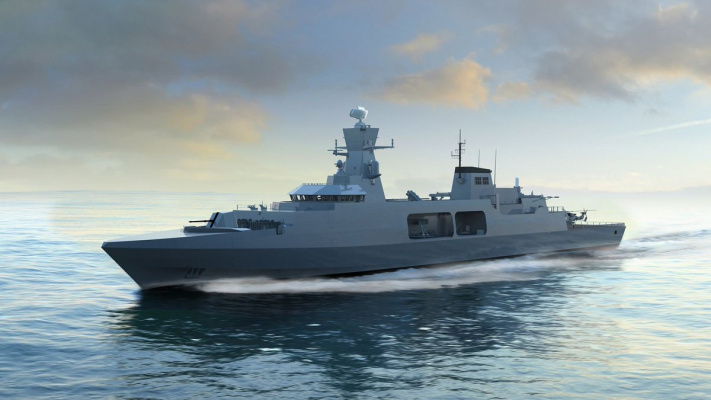 United Kingdom-based defense contractor Babcock International has begun production of the first lead ship, the Type 31 Inspiration.
Construction began after Ben Wallace (Minister of Defense) launched an automatic cutter in an assembly shop in Rosyth. The first of five warships of the new type will be launched as early as 2023, the rest of the frigates should be completed only by 2030. Two more ships will be built for the Indonesian naval forces. Among the possible end users are also called Greece and Ukraine.

The general-purpose warship Type 31 Inspiration is designed to perform a wide range of tasks, including detecting submarines, patrolling, collecting reconnaissance data, ensuring the landing and work of special forces, humanitarian support, and naval combat. He will have to be present in remote areas, fight pirates and terrorists.

This frigate is planned to carry a Sea Ceptor anti-aircraft missile system, a 57mm main cannon and two 40mm Bofors guns. The ship will be equipped with a 4D radar system and will be able to carry the Merlin rotorcraft or similar. He will be able to sail at a speed of 28 knots (52 kilometers per hour). The length of the ship is 138.7 meters. Its power reserve is 17 thousand kilometers.

The multitude of applications will provide modularity that will set the new standard for the British Navy. This ship building implies the use of universal structural modules (PODS), which can be changed and combined depending on the tasks and conditions of the current mission (even at sea). Thanks to this, the frigate can be used for completely different purposes, reducing the number of ships for different purposes. PODS the size of a shipping container will be compatible with all new surface ships and submarines. They will be able to carry unmanned aerial vehicles, autonomous equipment for finding mines, a command center for the landing, humanitarian aid, a surgical department and much more. The Type 31 frigates are seen as a cost-effective addition to the eight large Type 26 multipurpose ships for the United Kingdom Navy.