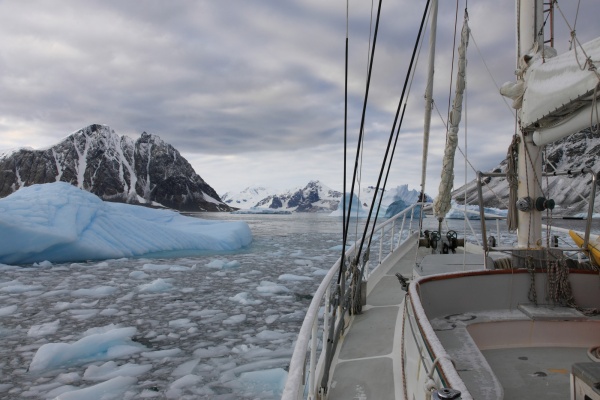 News from the cold corner of our planet - about Antarctica. For the first time in the past half century, a huge iceberg broke away from its ice sheet, and scientists discovered amazing things on the seabed.

With the help of observations from space, it was possible to see a large crack that formed on the Brunt Ice Shelf. A large iceberg, called A74, broke away from it.

A lucky coincidence helped to get to the place of the fault and survey the bottom: there was a research vessel nearby. Scientists waited two weeks for the iceberg to move away from the shelf, and then went to study the ice-free territory.
We did not have accurate information about the depth of the sea in the area. With the help of echolocation, we found that the bottom is at a distance of about 550-650 meters from the sea surface. Then we lowered the cable, at the end of which a camera and several sonars were installed. At the next stage, we went on a ship along the entire fault and collected data about the ecosystem that developed under the Antarctic ice sheet, "said Atun Purser, a researcher in the deep sea ecology group at the Alfred Wegener Institute for Polar and Marine Research.

The first images of the seabed made it clear to scientists that the region, which had been hidden for decades by thick layers of ice, has a high level of biodiversity. Researchers have found numerous organisms that have settled on rocks of various sizes. Most of them play the role of natural filters in the ecosystem of the area. Scientists also spotted sea cucumbers, starfish, at least five types of fish and several types of squid at the bottom.
In addition, we managed to collect water and soil samples from the bottom. Their geochemical analysis will make it possible to understand what the marine inhabitants eat at such a depth, as well as draw conclusions about the processes caused by global climate change in Antarctica.