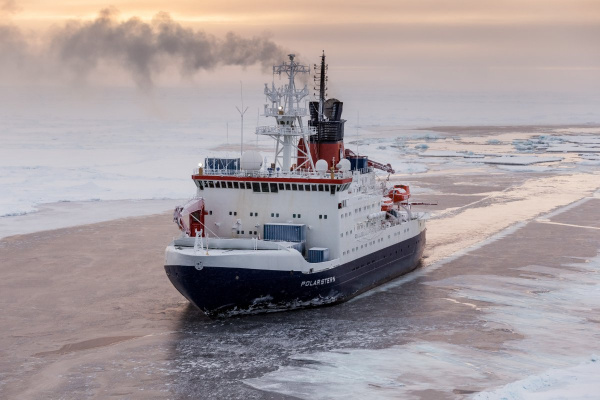 Most often, icebreaking ships are required for research operations, cargo transportation and escort of merchant ships. Scientific operations are carried out in the same environmental conditions as support operations, but without the time constraints associated with icebreaker assistance.

In some countries, icebreaker assistance is required less than a hundred times a year. In others, where work is constantly going on in the ice, escort is needed more than 3,000 times a year. From the point of view of the process, the icebreaker and the research vessel operate in approximately the same conditions. Both vessels must be able to pass through both solid ice and hummocks. Cargo ships operating independently in ice have similar tasks.

The KV Svalbard, built in 2001 for the Norwegian Coast Guard, was the first Norwegian ship with an Azipod® RVC to reach the North Pole. This is another major achievement for ships equipped with Azipod®.

In August 2019, KV Svalbard as part of the international scientific expedition Coordinated Arctic Acoustic Thermometry Experiment (CAATEX) with the support of the Norwegian non-profit research foundation The Nansen Center reached the North Pole. A vessel equipped with two Azipod® units with a 5 MW, crossed the dense polar ice at a speed of 6-7 knots.

Today, ice conditions somewhat simplify the reach of the Arctic, and the number of vessels capable of operating in this zone has increased significantly. Where many operations were impossible a few years ago, intensive work is underway today. This is the result of ice softening and technological advances.

The development of the Azipod VI series rotorcraft also played a critical role in the development of Arctic shipping. Today, oil and gas activities in the Arctic are becoming more and more active. For maximum economic efficiency, ships should be able to operate without permanent icebreaker assistance.