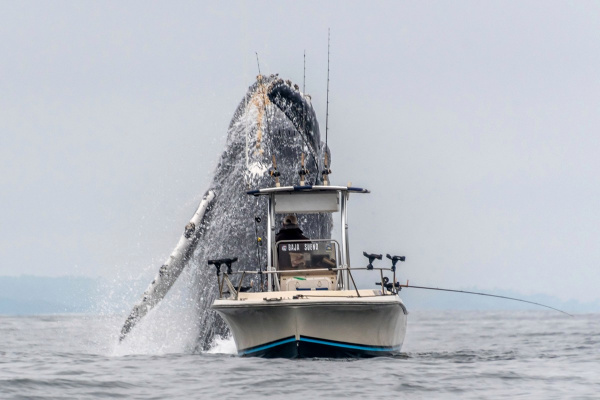 In the area of Block Island off the coast of the US state of Rhode Island, a whale jumped out of the water and struck a ship with five fishermen. Reported by CBS Boston.

The attack took place 16 kilometers from the coast. The fishermen saw a whale swim up to their boat, and after a few minutes they heard a loud knock. The blow was so strong that one man fell overboard and landed on the whale's back.

Friends pulled the fallen comrade out of the water. At that moment, they noticed that after the impact, a large crack had formed in the side. Water poured through the hole.

The coast guard came to the aid of the fishermen. They were taken to the shore, none of the men were injured. The damaged vessel was towed to Point Judith for repairs.

Earlier it was reported that off the coast of South Africa in Algoa Bay, a man fell out of a boat in a collision with a whale and almost fell into the mouth of a mammal. Another boat swam quickly to the man and rescued him from the water.