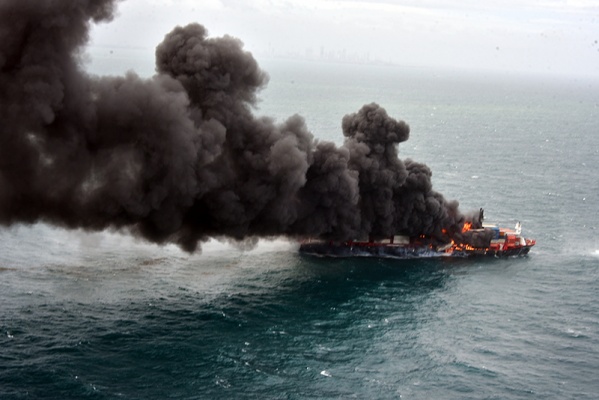 In Sri Lanka, the consequences of a fire on a ship in the Indian Ocean are being liquidated. The shores of the island are flooded with oil and littered with toxic chemicals, the sand hides tons of debris. On the beaches, instead of vacationers, people in chemical protection suits walk.

“The worst ecological disaster in the history of our island! Now we are trying to make sure that it does not spread further along the coast and the ocean. But so far the area affected by the disaster is huge! " - said the head of the agency for the safety of the seas Darshani Lahadapura.
The container ship burned in coastal waters for 10 days. Previously, it all started because of a nitric acid leak. The crew did not prevent the spread of the flame.

“The vessel was approaching the coast of the island in an emergency condition. This in itself is a crime against the entire state. Plus, we weren't even warned about it. This is a double crime! Now we have destroyed the environment along the entire coastline, ”- said Secretary General of the Freedom Party of Sri Lanka Dayashiri Jayasekara.
Now the ship is on the coast, it is impossible to tow it. The fire on the ship has been extinguished, but it continues to smolder, the temperature is too high. More than 300 tons of fuel oil remained in the fuel tanks of the container ship. Some of the fuel spilled over the ocean surface.
“
The biggest water pollution is in the Negombo and Colombo areas. There, of course, there is water with fuel oil. The beach is very heavily contaminated with small particles of plastic that scattered from the ship, ”said local resident Tamara Sanina.
The disaster killed dozens of marine animals. In addition to containers with raw materials, there are 25 tons of chemicals on board. Local residents are prohibited from touching the garbage due to its high toxicity. Fishing is limited within a radius of 80 km.

Japanese fishing vessel detained in Russia may remain there until July