Home News A huge cargo ship was equipped with a sail

A huge cargo ship was equipped with a sail 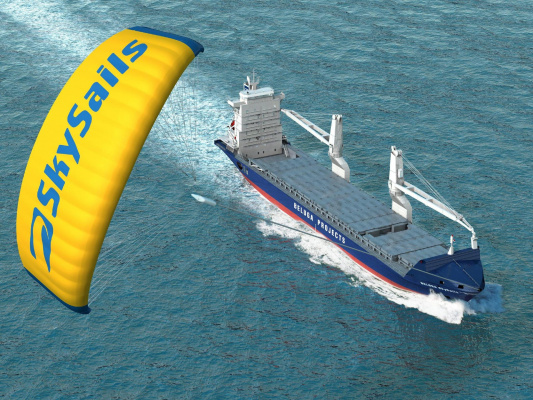 The French startup Airseas will test its eco—friendly development - a sail for cargo ships next month. The idea is extremely simple — a ship driven by wind energy will cross the ocean to check whether it is possible to reduce the carbon footprint of the shipping industry.

Currently, 80% of all goods are transported around the world on cargo ships. About 50 thousand flights are made annually. At the same time, these vehicles are refueled with a special petroleum product - bunker fuel, the combustion of which provokes greenhouse gas emissions. According to experts, about 2% of the current volume of carbon dioxide is just the emissions of marine fuel.

In this situation, the French startup Airseas has proposed its own way to reduce the carbon footprint of the shipping industry. The authors of the idea suggest using a special sail (which is more like a paraglider) so that the ship can sail under the influence of the wind. You can see how it will look here or on the official project page.

The main goal of Airseas is to create environmentally friendly propulsion systems that could cover up to 10% of the global fleet of cargo ships by 2030.

The development is planned to be tested in early 2022. The 500m2 sail will pull the 154-meter-long Ville de Bordeaux vessel across the ocean for six months. Such a sail is not quite similar to the classic version, since it flies in front of the ship like a kite. In addition, the mount can be converted to any type of vessel, so that the sail is to some extent universal.

Almost 50 people were infected with omicron after the cruise