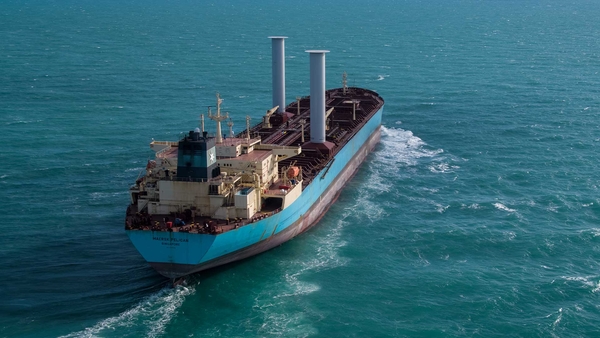 The fleet of vessels operated by the Brazilian mining company Vale will be replenished with a specialized dry-cargo vessel of the Guaibamax size for transporting ore with a carrying capacity of 325 thousand tons. The uniqueness of the dry cargo ship lies in the equipment of its five rotary sails, which, along with computer systems, will be supplied to the ship by the Finnish developer Norsepower. Vale reports that the use of such propellers will allow a bulk carrier to increase efficiency by up to 8% and, as a result, reduce carbon dioxide emissions equivalent to 3.4 thousand tons per year per vessel.

If this pilot project proves to be effective, it is estimated that at least 40% of the ore carrier fleet will be able to use this technology, resulting in a nearly 1.5% reduction in Vale's annual emissions from shipping iron ore by sea.

The modernized Norsepower version of such a rotor is compact and is a hollow cylinder 24 m high and 4 m in diameter. During the operation of the turbo sail, the cylinder rotates around its axis. The propulsion system is based on a physical phenomenon in which the air flow around a rotating body creates additional force. If you install a rotating cylinder (pipe) and place it on an open space (deck of a ship) to be blown by the wind, then the wind pressure on the cylinder increases several times, which allows the ship to move with much greater momentum than when using a conventional sail. This phenomenon is called the Magnus effect.

Vale spearheaded this rotor sail dry-cargo vessel project and implemented it in collaboration with technology provider Finnish Norsepower and South Korean ship owner Pan Ocean. It was decided to equip one of the VLOC bulk carriers with this technology, which are used to transport Vale's ore. The Shanghai Shipbuilding and Shipping Research Institute (SDARI, part of CSSC) was responsible for the development of the ship's project and its integration with rotary sails. The Chinese shipyard New Times Shipbuilding has built the ship, already modernized to accommodate the sails. The sails themselves were installed on the ship at another Chinese shipyard - PaxOcean Engineering Zhoushan. In the coming days, a Guaibamax-sized ore carrier will leave China for Brazil, where it will receive the first shipment of iron ore at one of Vale's Brazilian ports, which the company operates. The transition will take up to 40 days.

Vale announced an ambitious $ 2 billion investment in 2020 as part of a program to reduce harmful emissions from ore transportation. Vale also announced that it will cut Tier 3 emissions by 15% by 2035, in line with the Paris Agreement targets, due to the value chain of which shipping emissions are a part, given Vale is not the owner of these vessels.

In early June, Vale will receive the first Guaibamax vessel equipped with an air lubrication system. In the air lubrication system of the ship's hull, a layer of microbubbles is formed, which completely covers the bottom of the ship. This kind of "carpet" reduces frictional resistance between the hull and water, significantly reducing fuel consumption and, accordingly, harmful emissions from the ship. The reduction in fuel consumption will be around 5-8% with the potential to reduce annual emissions from Vale's iron ore transport by 4.4%.

In addition, Vale is preparing to switch to alternative fuels. Dozens of second-generation super-ore carriers already in service have been designed with a shift to LNG in mind, including space in the below deck to accommodate an LNG tank for the entire voyage on gas. The Ecoshipping program is developing a multi-fuel tank to store and consume not only LNG, but also methanol and ammonia.

Vale Do Rio Doce (since 2007 - Vale SA), founded by the Brazilian government in 1942, is currently the largest diversified metallurgical, mining and logistics company in Brazil and the world's third mining company and the largest producer of iron ore, pellets and the second largest nickel producer. It operates in 14 Brazilian states and more than 30 countries on five continents. Vale manufactures manganese, ferroalloys, copper, bauxite, potash, kaolin, alumina and aluminum. The corporation also has assets in the electricity sector.

Container to India with medical cargo for a nominal fee