Unmanned vessel Mayflower set off on a transatlantic voyage 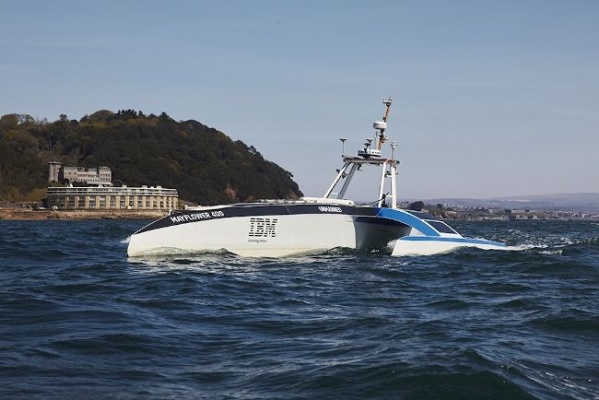 IBM Corporation and ocean research nonprofit ProMare announced that the autonomous vessel Mayflower (MAS400) is now in international waters trying to cross the Atlantic Ocean and reach the US coast.

The vessel started sailing from Plymouth (UK) on June 15. There is not a single person on board, control is carried out by the AI Captain system, which receives data from dozens of sensors.

It is estimated that the journey across the Atlantic Ocean to the Massachusetts coast will take about three weeks. During this time, Mayflower will collect scientific information that relates, in particular, to microplastics and the state of populations of marine animals.

Mayflower has been in development for several years. The trimaran has a mass in the region of five tons, its length is 15 meters, and its width is 6.2 meters. The vessel is powered by a solar-powered hybrid electric motor. The Mayflower can reach a top speed of 10 knots (19 kilometers per hour).

The name of the ship is a tribute to the memory of the first settlers who arrived in North America. The name Mayflower was a merchant ship on which the British crossed the Atlantic Ocean in 1620 and founded the Colony of Plymouth, one of the first North American settlements of the British.

The United States is now actively developing unmanned vehicles. One of the main events of the year on this topic was the delivery to the US Navy of the Seahawk, the "twin" of the famous Sea Hunter. Tests of the latter began in 2016. It is assumed that such military units, acting autonomously, will make it possible to more effectively identify enemy submarines.

Compared to the first ship, the Seahawk has some improvements in electrical systems, payload securing systems and operator control station.

In 2019, the Chinese began testing their unmanned spacecraft. The JARI-USV boat has received a modular scheme popular today, thanks to which it can solve a wide range of tasks, including the fight against enemy ships. Among the most interesting features is the ability to use an eight-cell vertical launcher.

304 vessels idle in ports around the world