The world's largest LNG bulk carrier has made its maiden voyage 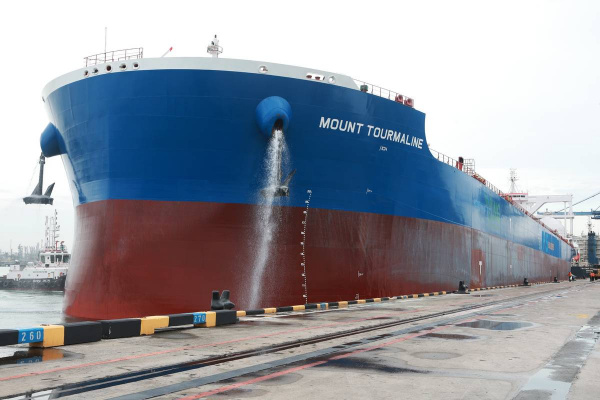 The Australian mining company BHP Billiton announced the start of commercial operation of the bulk carrier Mount Tourmaline. The vessel's propulsion system is adapted to run on hybrid fuel, however, according to an official statement from BHP management, only liquefied natural gas will actually be used.

Mount Tourmaline is a modern bulk carrier of the Newcastlemax type. The name of this relatively new standard size comes from the name of the world's largest coal export–oriented port, Newcastle, Australia. With a length of 299m and a width of 50 meters, the deadweight of the vessel is 209,000 tons.

The vessel was transferred to the customer - the shipping company Eastern Pacific Shipping (EPS) at the end of 2021. In addition to him, the operator has four more LNG bulk carriers of the same type, which are also chartered from him by Australian BHP for five years.

According to the calculations of the cargo owner, thanks to the use of liquefied gas as fuel, it will be possible to reduce the emission of harmful substances and compounds into the atmosphere by at least 30%. It is assumed that the main purpose of this "environmentally friendly" flotilla will be the transportation of ore between the ports of the west coast of Australia and Asia.

Mount Tourmaline will start its first flight from Yurong (Singapore), where it will refuel with liquefied gas at a special LNG bunkering station, after which it will head to Port Hedland on the west coast of Australia for the starting batch of iron ore.