The ocean brought an abandoned villa to a tropical beach 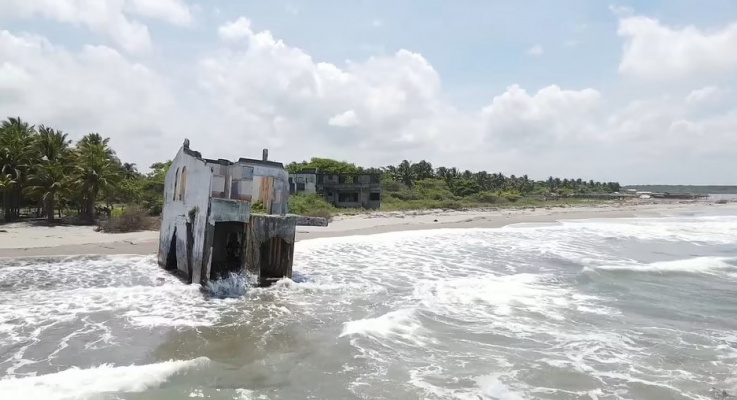 A strange sight opens to any person who finds himself on the beach of La Puntilla in the Central American country of El Salvador. Directly on it is a semi-submerged classic-style villa. The building looks like a dead whale washed ashore by the ocean. There are several versions of how this happened.

La Puntilla Beach is located 75 km south of San Salvador, the capital of this small Latin American country. It looks like a tropical beach should look like: white sand, green palm trees, ocean surf. A half-flooded building with two rows of columns looks at least mysterious against this background. How did it get here, who built it, and most importantly - why? Local residents have no clear answer to this question.

Judging by the fact that the villa has managed to become covered with vegetation, and old graffiti are visible on it, it has been in this state for a long time. According to one version, the Puerto Ventura hotel was located here. Its owners wanted to build a hotel as close to the water as possible, but at some point something went wrong.

According to another version, the mansion was abandoned in 1998 after it was destroyed by Hurricane Mitch, the second strongest Atlantic hurricane recorded in human history. Be that as it may, the abandoned building has managed to become a surreal local landmark.

Attack on a ship off the coast of Somalia