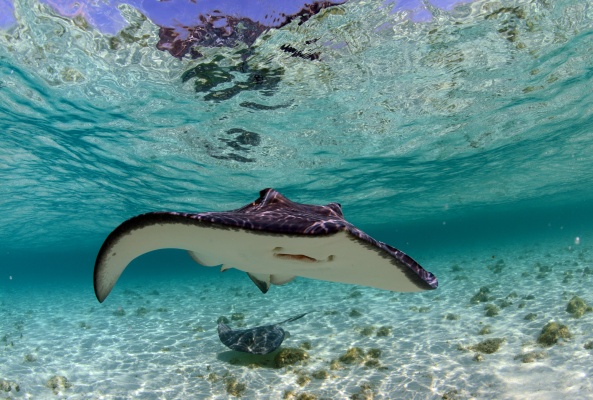 According to scientists, there are now more than 40 species of warm-loving fish in the water area.
Long-term studies of scientists have shown that sharks and stingrays from tropical and subtropical seas have replenished the ichthyofauna of Sakhalin Island and the Sea of Okhotsk due to an increase in water temperature.

"The large-scale analysis has been carried out on the basis of its own years of research and critical analysis of literary data for the last 200 years. One of the most interesting factors noted by ichthyologists is that there are already more than 40 species of sharks and rays in the waters of Sakhalin and adjacent waters, with an increasing number of migrants from tropical and subtropical seas" reported to the press service.

According to researchers, warm-loving species of sharks and stingrays are increasingly found in the Far Eastern waters, with a very different habitat, including the Notorynchus cepedianus, whale shark (Rhincodon typus), the sea fox (Alopias vulpinus), and the ordinary shark (Rhizoprioon nodacutus).
"In recent years, the catching of cartilaginous fish (sharks, stingrays and chimeras) has increased in the waters of the South Kuril and Sakhalin (Okhotsk and Japanese seas, Pacific Ocean) in the Far Eastern Region. The reason for the migration of sharks and stingrays from tropical and subtropical areas is the significant warming of marine waters. Many members of this group are unable to cross the ecological threshold, and once the water temperature rises, they seek to develop new areas.

Goods turnover in Russian seaports decreased by 3.2% to 128.3 million tons during January-February