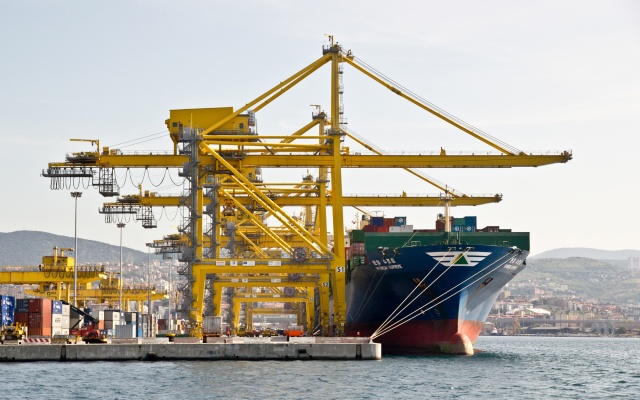 The International Classification Society DNV  gave the South Korean shipyard HMD the approval  of the new  container vessel design for the 1.9 thousand TEU Euro-project. TEUCongreen-1900.
DNV experts participated in the development of the HMD  Container Ship project. The vessel meets the requirements of the European maritime container transport market. The draft was reviewed with the DNV regulations for container vessels, including the possibility of using LNG as a ship’s fuel.
The modern styling features extensive facilities for placing euro-standard containers in the hold and on the deck, as well as for accommodating 45 ft long containers in a dedicated hold and on the deck.  The renewed fuel concept with a Type C fuel tank behind the wheelhouse is used as an option.

During the work on the joint scientific and technical project, technical advice was provided by the Hamburg Container Centre of Excellence, which helped to optimize cargo positioning and assess the environmental compliance of the project, including EEXI.
The Hyundai Mipo Dockyard is a recognized as  professional  in the construction of mid-size vessels. The shipyard has its own design bureau using the latest information technologies and software.
DNV is the largest international classification and certification society since the merger of the Norwegian Det Norske Veritas (DNV) and the German Germanischer Lloyd (GL) on 12 September 2013. In addition to certification and certification services for the maritime industry, the company provides classification and consultancy services to the oil and gas industry, in the renewable energy sector. Today DNV not only performs classification, technical support, but also develops its own software, provides independent expert opinions for marine and energy industries. DNV GL works in 100 countries, with a staff of almost 16,000. people. DNV GL decided to reduce its name to DNV with effect from 1 March 2021.

Container availability in major European ports has returned to normal