Cruise ships are scrapped in masse 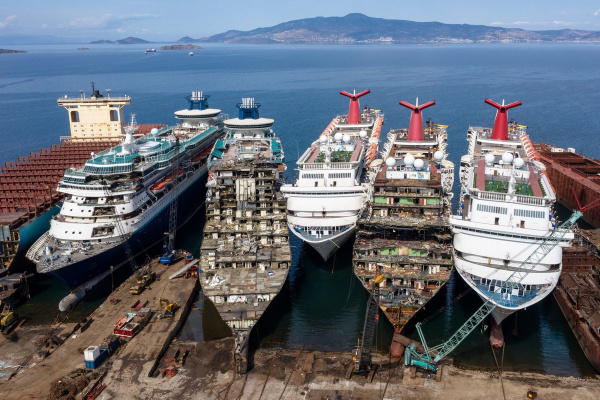 The Covid-19 pandemic has accelerated the renewal of passenger fleets. Large companies are replacing older ships with newer ones, and more modest operators are sometimes forced to part with the last liners in order to avoid bankruptcy.

At the same time, the total number of liners sent for recycling is growing steadily, and their average age is decreasing. In particular, according to Indian Express, the number of cruise ships that have arrived in the Indian port of Alang for dismantling in the Indian port of Alang over the past 12 months has reached 14 - while in ordinary years this figure is, on average, 1-2 units. By the end of 2021, several larger liners are expected to arrive for recycling.

According to the port administration, this year the share of "passengers" reached almost 10% of the total number of ships brought for dismantling at Indian enterprises, and their total displacement exceeded 2 million tons.

The largest of the arrivals was the Karnika liner (69,845 grt), which was sold for metal by the operator Jalesh Cruises, which went bankrupt due to restrictions related to the Covid-19 epidemic. The vessel was built in 1990 by the Italian designer Renzo Piano at the Fincantieri shipyard for Princess Cruises and received the name Crown Princess. For the last ten years of its active sea career, the liner worked on cruise lines based in Australia, and in 2019 it was sold to the Indian company Jalesh Cruises, which, in turn, was forced to send it for scrap.

Another former "princess" who became an unwitting victim of the pandemic was the Columbus liner, launched in 1989 under the name Star Princess. In recent years, it has been operated by UK-based Cruise & Maritime Voyages, which has never survived the Covid-19 crisis.

By the way, the 56-year-old Marco Polo became the oldest passenger ship, which this year is destined to end its life at the last berth in the port of Alang. It is curious that he was born back in 1965, for many years it bore the name ... "Alexander Pushkin" and was one of the flagships of the Soviet passenger fleet. In the 1990s, she was sold to the West, rebuilt into a comfortable liner and until last year was known in the tourist market as an operating veteran liner.

And the youngest cruise ships expected to arrive in Alang before the end of the year may be Costa neoRomantica (built in 1993) and Carnival Fascination (1994), previously sold by their original owner, Carnival Cruise Line, to one of the Chinese operators.