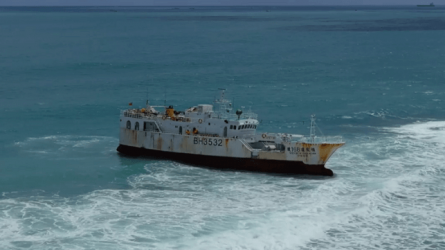 Three large Taiwanese oarships rolled up Tuesday evening for a bank near Pointe Aux Sables, Mauritius, a few miles west of Port Louis. The three vessels are carrying around 120 tons of diesel fuel and, after promises by the Minister of Protection of the Shoreline, Kawi Ramano, rescuers will be the first to get involved in its removal.

The Mauritius Port Authority has intensified the cleanup of the spill to minimize the risk of pollution and has begun activities focused on the installation of booms. Copies from the scene of the conflict show that the vessels are wanted in the area of the knowledgeable surf, which may disturb the containment and lightering service. No signs of a spill have been found at this point.

The primary vessel for the bank was Wen Hang Dar 168, followed shortly thereafter by Foo Man Yu Feng 1 and Foo Man Yu Weng 168, which ran aground on a bank in nearby Ban de Dam. Iqbal Mulan, the agent for the ship's operator, Wen Hang Dar, told the Aboriginal media that the ship ran aground Tuesday evening in fierce weather. All crew members were saved to the helicopter, and though they were "in shock," they were brought to a local hotel in good health.

The crews of the second and third ships reportedly threw the battleship into the water and were saved by the good-hearted Samaritans in small boats. Some minor injuries were reported. The root cause of the multi-vessel conflict is being investigated again, but political obstruction criticized Prime Minister Pravind Kumar Yugnauth's leadership for failing to prevent it. "The authorities took out no lesson after a moment with a Wakashio," pronounced end of parliament through frontier Labor Party Arvin Boolell, having a presence of a inexhaustible bulk carrier, some that ran aground and spilled fuel in a crimson lagoon in early July 2020.