Home News The Bulk Carrier XIANG FU ran Aground, Collided with a Container Ship and Ran Aground

The Bulk Carrier XIANG FU ran Aground, Collided with a Container Ship and Ran Aground 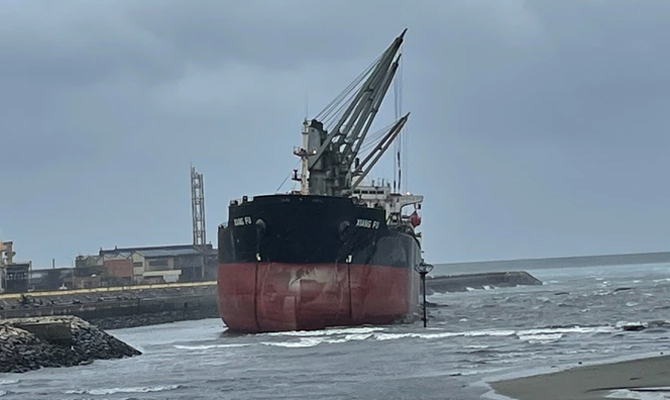 The bulk carrier XIANG FU broke away from its berth at Taichung Port, Taiwan, around 00:00 local time on February 20 due to a storm that struck the Taiwan Strait and the west coast of Taiwan.

The ship broke away from its berth and collided with the 650 TEU container ship OSG ADMIRAL (IMO 9131022, operated by SHANGHAI ANRITA SHPG CO LTD) moored nearby. OSG ADMIRAL sustained light damage. The XIANG FU was drifting through the basin and was stranded near an embankment.

About 11 hours later, she was taken off the shoal by tugboats and brought back to the pier. The extent and nature of the damage is unknown, but there is mention of an oil leak which is not yet being investigated. The bulk carrier XIANG FU, IMO 9129029, deadweight 46841, built 1997, flag Panama, operated by SHANGHAI VASTEAST INTL.

Earlier it became known about poisoning of the crew According to updated information, 10 local dockers on board of Bordo Mavi dry cargo vessel were poisoned. The port administration reported that ten dockers were admitted to hospital with complaints of poisoning (sore throat, difficulty in breathing).

"Now there are four people in the hospital - local residents, dock workers, employees of the local coastal enterprise. It is not yet clear what they were poisoned with. Six of them refused to be hospitalized. Now in the port laboratory will take samples for chemical analysis of the air, we are waiting for the results", - specified the source.

Experts suggested that the dockers' poisoning could have been caused by the fuel from the cranes on board the bulk carrier, which could have been diluted with some chemical substance. But the port administration said that the ship's cranes did not have any fuel at all.

In Greece, a Man Died on a Burning Ferry, 10 More are Missing