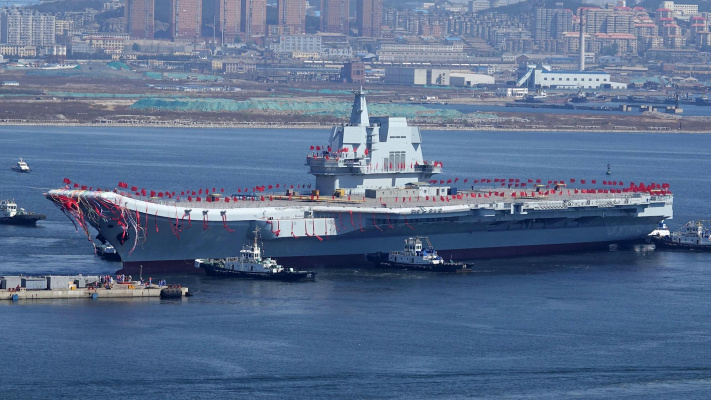 Thanks to the combined efforts of the military and civilian shipbuilders of China, the aircraft carrier of the new generation can be launched in three months.
It is reported by the American Center for Strategic and International Studies (CSIS) in Washington based on the analysis of photographs taken using the Maxar satellite system.

As you know, the Chinese Navy currently has two aircraft carriers, which are designed in accordance with Soviet-style projects and are equipped with raised jumping platforms in the bow of the flight deck. The capabilities of an aircraft carrier of this type to ensure the launch of modern, more efficient carrier-based fighters are significantly limited due to the lack of catapults. The latter are necessary for launching heavier aircraft, which means they are capable of carrying more solid weapons.

The new Chinese aircraft carrier is planned to eliminate this drawback by installing two at once, most likely, electromagnetic catapults. According to preliminary data, the decision in favor of electromagnetic catapults instead of traditional steam catapults was made by the leadership of the Chinese Navy as a result of studying the latest developments of the US Navy in this area and the operation of e / m catapults on American aircraft carriers.

The use of electro-magnetic catapults will allow the Chinese fleet to equip its new generation aircraft carriers with more modern fighters and fixed-wing long-range aerial surveillance aircraft, as well as significantly increase the rate of climb of carrier-based aircraft.

Analyzing satellite images, experts noticed that two extensive cutouts in the aircraft carrier's flight deck, previously left for lowering into the internal compartments of large mechanisms and components of various systems, are now closed, and the catapult sites (with the exception of the right bow) are closed from above with temporary canopies.

Satellite imagery also made it possible to appreciate the high degree of interaction between the Chinese military and civilian shipbuilders. Thus, the assembly of the ship is carried out in the dry dock of the China State Shipbuilding Corporation (CSSC) - the world's largest shipbuilding enterprise specializing in the construction of large civil ships.

So, earlier on the site of the 003 aircraft carrier, a series of large container ships was assembled for one of the French shipping companies. Separate blocks of container locomotives are still being mounted in the same dock, not far from the stern of the new aircraft carrier.

According to CSIS experts, the launching of an aircraft carrier into the water can be carried out in the next three months to six months, but then it will take another 2-2.5 years for its completion afloat, installation of weapons and other systems, as well as for mooring and sea trials. According to the calculations of the Pentagon, the ship will be able to be delivered to the customer, the Chinese Navy, no earlier than 2024.

It was assumed that the fourth-generation fighter J-15 (the Chinese version of the Russian Su-33) would be used for its armament, but it is possible that instead of it, the fifth-generation fighters FC-31, made using the Stealth technology, will be included in the carrier wing.

Experts associate this possibility with the photographs that have appeared of this aircraft, equipped with a launching device for a catapult, as well as in a variant with folding wings, which provides compact storage of fighters in the ship's hangar.

Cruise ship for the polar seas