Home News The vessel ran aground due to wrong course plotting

The vessel ran aground due to wrong course plotting 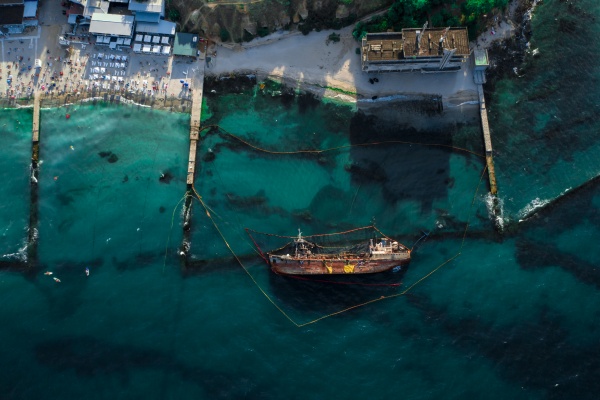 The balker entered the port for loading in cramped conditions without pilotage, as is the practice in this port. The captain was informed of shallow sections in the canal between the YC5 and YC9 buoys. The wind was northwest, with a speed of 35 knots, and the snow made it harder to see. The canal was covered with ice. The vessel followed the tug for loading.

After the loading operations, the bulk carrier left the port at a speed of five knots, following the tow. The wind at the time of exit was from the west-northwest, the speed was 25 knots, with gusts up to 30, and visibility was good. Captain, the watch officer and helmsman were on the bridge. The captain stood at the central control desk, visually observing the ship’s progress, checking against electronic charts. The officer on duty monitored the movement by means of the port radar station and the distances between the vessel and the buoys on both sides of the canal.
Near the CB8 buoy, the bulk carrier entered the open sea, while the tug headed towards the berth. The speed of the vessel was now seven knots. The captain continued his visual observation and ordered the watch officer to monitor the distance between the bulk carrier and the buoys.

A few minutes later, the captain informed the watch officer that according to the electronic chart, the vessel had left the channel. However, it is actually located between the buoys YC11 and YC12, which led it to conclude that the electronic chart does not accurately reflect the position of the ship.
Near the YC11 and YC12 buoys, the captain decided to change course and the ship approached the buoys on the starboard side. The rotation was scheduled as soon as the bulk carrier had reached approximately 1.5 of its length to the YC9 and YC10 buoys. A few minutes later, the position of the vessel at the point of re-entry was shown on the electronic chart. To determine the point for the upcoming right turn, the captain estimated the distance to the buoys visually and electronically. He then ordered the steering wheel to turn 10 degrees to the right. After 20 seconds, when the ship’s position had not changed, he ordered a 20-degree turn.
When the beamer finally began to turn, the captain ordered a watchman to observe the YC10 buoy from the port side and report the distance to it. When the buoy was in the middle of the vessel, the helmsman slowed down the rudder in order to take the next course. The officer on duty then informed the captain that the vessel had passed the YC10 buoy and the captain determined that the vessel was to the left of the fairway and continued in that direction. The captain ordered the helmsman to turn the wheel to the right, and soon the speed of rotation of the beamer began to increase. After about 15 seconds, the vessel sailed in shallow water to the south-east of the fairway at a speed of 7.5 knots, which immediately began to shrink, and the vessel soon ran aground.

What to draw attention signing an employment contract