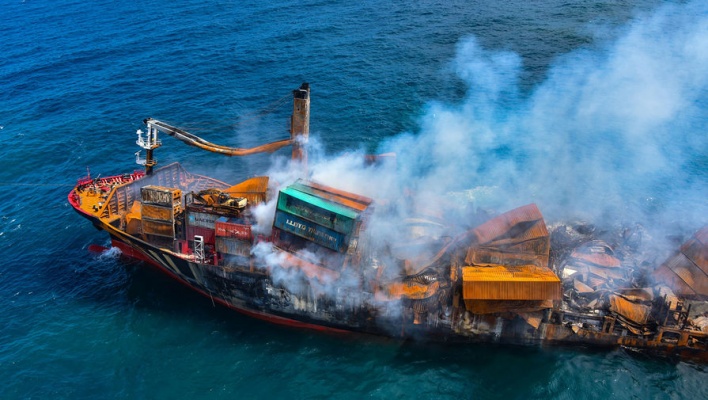 Sri Lankan authorities have turned to the UN and other international organizations for help in assessing the significant damage to the environment and the national economy caused by the burned-out Singapore container ship X-Press Pearl.

"We turned to the UN and other international organizations for assistance, since Sri Lanka does not have enough experience in accurately assessing the consequences of such large-scale disasters," the Daily Mirror newspaper quoted the Minister of Urban Development and Coast Protection of Nalaki Godakheva on Thursday..

According to her, UN specialists will arrive in Sri Lanka this week. The country's authorities will seek compensation for part of the cost of extinguishing the vessel in the amount of $ 40 million from the owner of the burned-out container ship, X-Press Feeders.

The container ship X-Press Pearl caught fire on May 20, when it was at anchorage about 18 km from the coast. It carried 1,486 containers, including containers with 25 tons of nitric acid, plastics and chemicals. The fire fighting lasted about 10 days. According to a preliminary version, a chemical leak could have been the cause of the fire. The entire crew of 25 was evacuated. The ship's captain has been detained and is under investigation.

Attempts to divert the burned ship further from the coast ended in failure. The hull of the X-Press Pearl shattered, its stern sank at a depth of about 20 meters

304 vessels idle in ports around the world

Tallink's new vessel will be made early next year