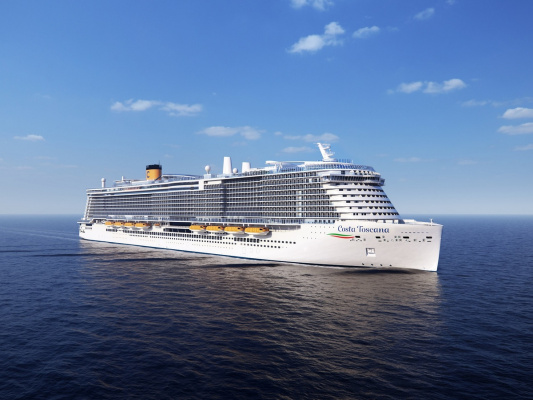 According to the Finnish shipbuilding company Meyer Turku, whose shipyard built Costa Toscana, in addition to the improved propulsion system, which ensures more economical use of the LNG stock, the vessel has an increased level of energy efficiency. At the same time, the entire volume of washing fresh water consumed by passengers and crew is produced by onboard desalination stations.

Costa Toscana is the second LNG liner built by Meyer Turku for an Italian cruise line. In 2019, Finnish shipbuilders handed over to the customer the Costa Smeralda of the same type, which also runs on liquefied gas.

The first test cruise of the new liner will be a 7-day sea voyage on which it will depart from the Italian village of Savona. During this voyage, Costa Toscana will visit Marseille, Barcelona, Valencia, Palermo and Civittavecchio. Subsequently, the liner is supposed to be used on tourist routes in the western Mediterranean.

The future plans of Costa Toscana's management are to continue updating the fleet by including more environmentally friendly vessels, including those equipped with hydrogen fuel cell engines and solar panels as auxiliary energy sources.