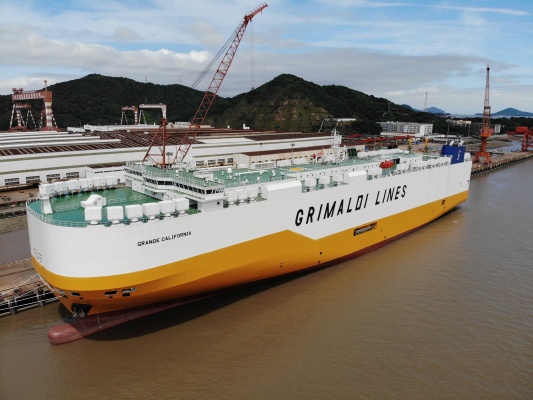 The last of seven specialized Ro-Ro vessels for transporting cars and trucks (PCTC) ordered from the Chinese shipyard Yangfan in Zhoushan, was put into operation by the Grimaldi Group on June 8, 2021, according to a press release from the Neapolitan Ro-Ro fleet operator.
The ship, named Grande California, is, like the six predecessors in the series already in service, the world's largest and most environmentally friendly marine vehicle carrier.

The Grande California is 199.9 m long, 36.45 m wide, 65.255 gross tonnage, and an operating speed of 19 knots. The ship under the Italian flag is capable of carrying about 7.6 thousand CEU (automobile equivalent of the ship's load).

The four-deck vessel with lifting decks is characterized by cargo flexibility: in addition to cars, it is capable of transporting any wheeled equipment (cars, vans, trucks, tractors, buses, excavators, etc.) up to 5.3 m high. the ramp allows loading cargo units weighing up to 150 tons, while the configuration of its 12 decks and the system of internal ramps minimize the risk of damage to the rolling cargo during loading and unloading operations.

The vessels of this series are distinguished by their high environmental friendliness and energy efficiency. The main engine of the power plant supplied by MAN Energy Solutions is electronically controlled as required by the new regulations for reducing nitrogen oxide (NOx) emissions, and is equipped with an exhaust gas treatment system to reduce sulfur oxide (SOx) and particulate matter emissions. In addition, the vessel complies with the latest ballast water management regulations.

Grande California will be hosted on the weekly Ro-Ro service of the Grimaldi group between the Mediterranean and North America, which regularly calls at 15 ports in Italy (Civitavecchia, Gioia Tauro, Livorno, Salerno, Savona), Spain (Valencia), Belgium (Antwerp ), Canada (Halifax), USA (Baltimore, Davisville, Houston, Jacksonville, New York) and Mexico (Altamira, Veracruz).
The Grimaldi Group of shipping companies, headquartered in Naples (Italy), belongs to the Grimaldi family and today is one of the largest international Ro-Ro ship operators. Linear shipping company specializes in the sea transportation of oversized cargo, wheeled vehicles and containers. In August 2016, the Grimaldi group acquired the ownership of the ferry operator Finnlines.