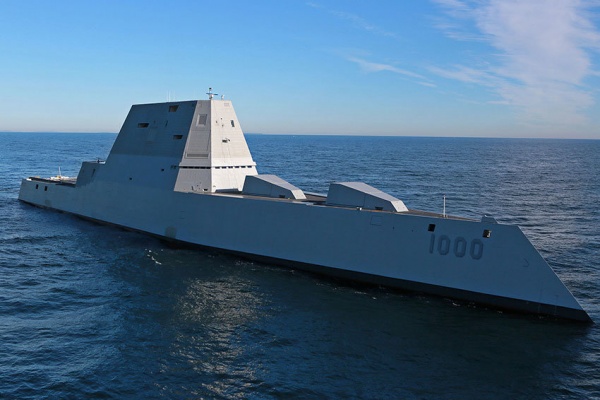 The Zumvolt-class stealth destroyers of the US Navy will receive a new weapon configuration. Instead of expensive artillery systems with questionable effectiveness, destroyers will receive missiles with a C-HGB (Common Hypersonic Glide Body). This will allow you to hit targets thousands of miles away in minutes.

Initially, the Zumvolts were seen as a means of supporting the ground forces. It was believed that destroyers with low radar signature would be able to approach the coast as close as possible, providing heavy fire from 155-mm AGS guns. But the development of destroyers turned out to be unnecessarily expensive - the original plan for 32 ships was canceled, limiting itself to three ships, and the development of LRASM active-rocket shells turned out to be unjustifiably expensive even for the Pentagon. In 2017, the Zumwalt was retrained to deal with enemy ships and ground targets at long distances. So, last year, the US Congress instructed the leadership of the US Navy to integrate C-HGB hypersonic weapons into stealth destroyers. This will allow the Zumwolts to hit targets at distances of several thousand miles.

The C-HGB, developed by the US Navy and Ground Forces, is a warhead mounted on a booster. Like a ballistic missile, the C-HGB reaches a certain height, after which the warhead glides towards its target at hypersonic speed. At the same time, the C-HGB received high-explosive warheads that provide destructive power comparable to "conventional" ballistic missiles. The C-HGB is believed to be a missile that was repeatedly mentioned by former President Trump, who claimed that the American development hits targets with a minimum deviation of 15 centimeters. The declared maximum speed of the C-HGB is Mach 17 (20825 km / h) - while the unit can maneuver at speeds up to 6100 km / h, bypassing the enemy's missile defense. The flight range reaches 5000 miles (8046 km). So, during tests in March last year, the C-HGB covered a distance of 2500 km, and the deviation from the target was only 36 centimeters.

Studying the possibility of installing missiles on the Zumwalt, US Navy experts concluded that additional launchers on the deck would significantly increase the ship's "visibility". To compensate for this effect, experts from the US Naval Institute propose to remove one of the two AGS gun mounts, replacing them with missiles.

The US Navy is modifying several Multiple All-up-round Canisters (MAC) launch containers used to launch Tomahawks from Ohio-class submarines. Each MAC holds seven Tomahawks, but the hypersonic missiles are larger in diameter, so there will be fewer of them in one container. The place of one-gun mount Zumvolt can be replaced by two launch containers, which will provide the destroyer with up to 16 hypersonic missiles. The US Navy plans to complete the rearmament of one of the Zumwalt-class destroyers with C-HGB missiles by 2025. Such ships, in a potential conflict with Russia or China, would allow strikes against targets "from a distance of thousands of miles," noted the author of the American publication Popular Mechanics Kyle Mizokami. In other words, the launchers will be able to launch an attack from a safe distance from the target. It is possible that the use of Zumvolts in a new role will allow revising the project, which some experts consider to be a failure.